Get how similarity between the training data and the income data?

I want something like a semi-supervised model. I want to predict some class labels, however, I cant training my model with some anomalies/new behaviors that are going to happen eventually.

With the time the vibration of the "ON" state will start to become slightly different because of some defects, however if I just train with "ON" and "OFF" for sure it'll continue to identify that my motor is "ON" because the vibration with defects are more close to the model "ON".

Therefore I would like to identify how far is my new data from the data that I have already trained my model.

For example, 1 - My predict_prob returns ON because has $98$% of chance to be ON and $2$% to be OFF. So far so good, however my DATA is slightly different from the ON mode in the training data, so I would like to measure this difference, like it has $98$% probability to be ON between ON and OFF and it is $95$% similar to the original model, so with the time this number ll be reduced. For example:

Can someone help me with this part "and $85$% similar to the training data"?

I think I got your difficulty. You are trying to detect defective motors whilst there is more than one state in which they are non-defective. I am assuming that since there are several of those motors even when a motor is OFF the sensors still catch "noise" vibrations. You do have two distinct known patterns: ON and OFF, i.e. OFF is not just the absence of vibration. I see two options for this classification (below) but first let us make a small detour:

and 85% similar to the training data

The vast majority of ML techniques are based on distance measures: the training data is used to define a blobs (e.g. distributions) in (possibly very high dimensional) space, one for each class. The classes of new samples are predicted by comparing their distance to the class blobs - the closest blob is the predicted class.

The probabilities (.predict_proba) of models such as SVMs in sklearn are literally distances, in the case of SVMs the distances within the support vectors. In other words, we can understand these as distances between the middle points of the two blobs: ON and OFF. e.g. 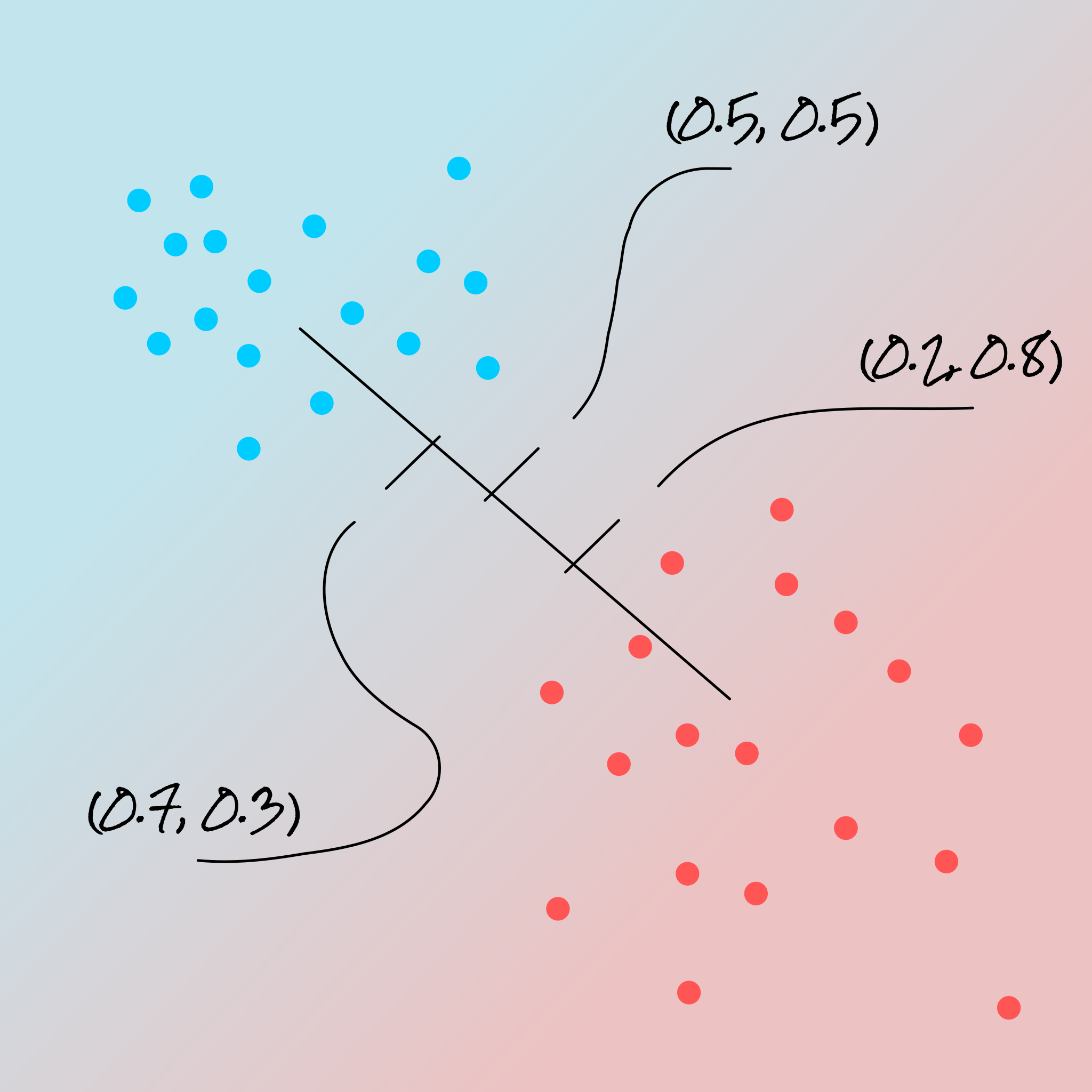 This means that assuming two things:

We can say that:

One can choose the probability threshold to his liking (be it 80%, 70% or 90%), as a way to adjust for false positives or false negatives.

Issues with this solution

Forget about the ON and OFF classes and dump both sets of samples of non-defective motors as one single (non-defective) class and into a novelty detection algorithm. In other words, do not differentiate between ON and OFF motors. Say that both cases (ON and OFF) are OK, just anything that is quite far away from any known cases is not-OK. This will look as a bunch of blobs in space and anything far away from these blobs is a defective motor.

I'll suggest starting with an One Class SVM because it has a parameter called nu= which is quite easy to interpret. It varies between 0 and 1 and the closest to zero it is the more the algorithm is permissive of anomalies (defects) away from the blobs. 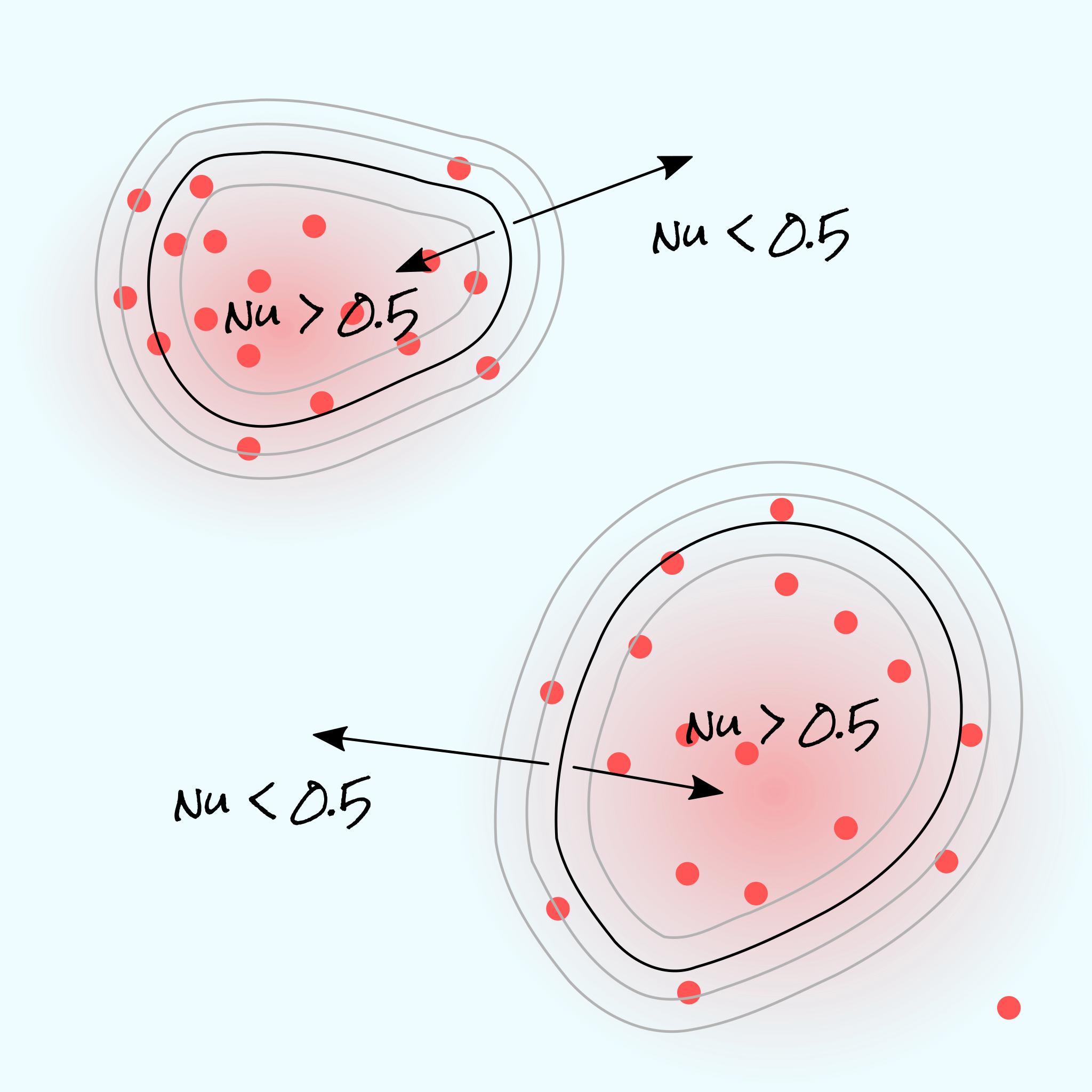 Note that we have exactly the same points on this picture as in the previous one. The only difference is that this time all of them are red.

This solution will cope with defects that are anywhere, not only in between the states of ON and OFF.

Issues with this solution

P.S. If one needs to do both classify ON and OFF AND classify defective and non-defective motors, then one should build two separate models.

Not the answer you're looking for? Browse other questions tagged scikit-learn svm anomaly-detection or ask your own question.

3
Grouping similar data/images
1
How does one fine-tune parameters and weights at the same time?
8
How to handle preprocessing (StandardScaler, LabelEncoder) when using data generator to train?
0
Why is Local Outlier Factor classified as Unsupervised if it requires training data with no outliers?
1
How to identify new clusters that the training data has never seen
2
Anomaly detection - relation between thresholds and anomalies
1
SGDClassifier : Get the weights and bias for each training step