Which direction of the normal vector that defines a Perceptron hyperplane is default?

This slide here defines a hyperplane by using a normal vector $w$. 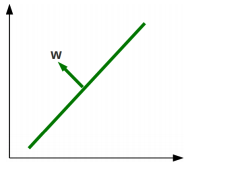 "The hyperplane passes through origin"

I see a lot of figures with different directions. 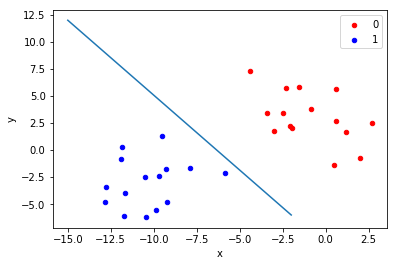 Where $w$ and $b$ play in the opposite direction.

This question is for general hyperplane.

The normal direction is the direction that is perpendicular (also known as normal) to the plane.

Take a piece of paper (treat it as a plane), hold a pencil perpendicular to the paper. The pencil is parallel to the normal direction.

There is no such thing as the default direction as you see, a piece of paper that is oriented in a different manner would have a different normal direction.

The perceptron can be described by the normal vector $\boldsymbol{w}$, a bias $b$ and the signum function $\text{sgn}$ as an activation function.

By defining the output $y=1$ for the positive class and $y=-1$ for the negative class. The optimization will lead to a normal vector pointing towards the positive class. The bias will shift the hyperplane out of the origin. Normally, the weight vector $\boldsymbol{w}$ is initialized with normally distributed random noise. In the lecture notes, some arbitrary simple weight vector was used for the example.

Why does the weight vector point into the direction of the positive class?

To answer this question we will look at an artificial example in the following picture.

Without looking at the sources, it seems like the first image shows parameter space and the second the feature space. So they are not really comparable in any direct, meaningful way.

In feature space, a hyperplane can point in any direction depending on the features. In the parameter space for a perceptron the hyperplane always goes through the origin. The second image just depicts something different.

9
Is there a method that is opposite of dimensionality reduction?
1
Optimal parameter estimation for a classifier with multiple parameters
1
An outlier detection for this data
2
How to interpret dummy variable in ML prediction?