I have a hobby project which I am contemplating committing to as a way of increasing my so far limited experience of machine learning. I have taken and completed the Coursera MOOC on the topic. My question is with regards to the feasibility of the project.

The task is the following:

Neighboring cats are from time to time visiting my garden, which I dislike since they tend to defecate on my lawn. I would like to have a warning system that alerts me when there's a cat present so that I may go chase it off using my super soaker. For simplicity's sake, say that I only care about a cat with black and white coloring.

I have setup a raspberry pi with camera module that can capture video and/or pictures of a part of the garden. 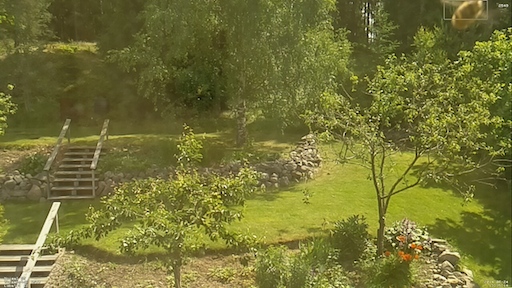 My first idea was to train a classifier to identify cat or cat-like objects, but after realizing that I will be unable to obtain a large enough number of positive samples, I have abandoned that in favor of anomaly detection.

I estimate that if I captured a photo every second of the day, I would end up with maybe five photos containing cats (out of about 60,000 with sunlight) per day.

Is this feasible using anomaly detection? If so, what features would you suggest? My ideas so far would be to simply count the number of pixels with that has certain colors; do some kind of blob detection/image segmenting (which I do not know how do to, and would thus like to avoid) and perform the same color analysis on them.

You could simplify your problem significantly by using a motion/change detection approach. For example, you could compare each image/frame with one from an early time (e.g., a minute earlier), then only consider pixels that have changed since the earlier time. You could then extract the rectangular region of change and use that as the basis for your classification or anomaly detection.

Taking this type of approach can significantly simplify your classifier and reduce your false target rate because you can ignore anything that is not roughly the size of a cat (e.g., a person or bird). You would then use the extracted change regions that were not filtered out to form the training set for your classifier (or anomaly detector).

Just be sure to get your false target rate sufficiently low before mounting a laser turret to your feline intrusion detection system.

This is an interesting and also quite ambitious project :)

I am not sure anomaly detection (at least in the sense described in the course you followed) would be a very fitting algorithm in this case.

I would consider a more viable approach to be what has been discussed at the end of that course where a Photo OCR workflow was demonstrated.

The approach would consist of segmenting your image in smaller "blocks", and going through them one-by-one using a supervised learning algorithm and try to classify each block according to whether it contains a cat or not. If one block contains a cat, the alarm goes off. As a bonus, you get the position of the cat as well, so that you may think of incorporating some "automatic" response as a future step to your project.

The benefit here is that you will not have to train your algorithm using a dataset specific to your garden (which, as you mention is difficult to create), but you can use images of cats taken off the net (e.g. perhaps you can search for "cat on grass" or something), and perhaps patches of photos from your (or other) gardens. Therefore you don;t have to spend your time collecting photos from your camera, and you avoid the risk of having a very small (comparable) sample of positives (i.e. cats).

Now, of course how easy it is to build an accurate cat detector is another topic..

The strategy of motion/change detection is certainly adequate, but I would add an extra operation. I would detect those regions that are more likely to be changed, for instance, the ladder seems a place where humans can be (also cats) and grass where dogs, cats or humans can be.

I would capture a map with size of the object and trajectory and with this I would create a cluster with the aim of detecting an object (with specific size within the image in terms of pixels) that moves with a certain speed and trajectory.

You can achieve this by using R or I would suggest OpenCV in order to detect movement and follow different objects.

OpenCV's background subtraction will find objects moving about your harden. After that you could use a classifier or shape analysis to differentiate between cats, people, trees and etc.

Is it a bird? Is it a cat? We have black-and-white cat-sized! magpies here. so that would fail.

First thing would be to exclude all areas that are green, cats are seldom green.

Then compare the rest to a reference image to remove static things like stones and stairs.

Detecting objects of a minimum size should be possible, but for a classification the resolution is too low. Could be also your neighbor testing his new remote controlled drone.

With two cameras you could do a 3d mapping of the objects and eliminate flying objects.