I really need help with GAM. I have to find out whether association is linear or non-linear by using GAM. The predictor variable is temperature at lag0 and the output is cardiovascular admissions (count variable). I have tried a lot but I am not able to understand how to interpret the graph and output that I am getting.

So here is the output for summary that I am getting:

Can someone please explain the output in detail. What this output is explaining? and also can someone help what this plot (picture attached) is showing? Please be kind as I have invested a lot of time but can not find how to interpret this. 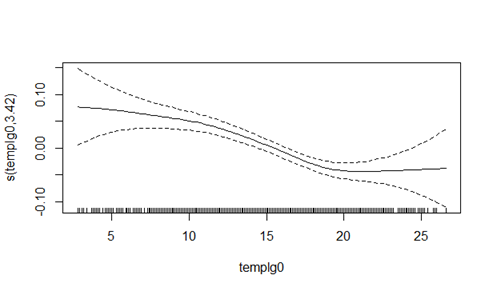 What you do here is to use smoothing splines regression. Have a look at the book "Introduction to Statistical Learning" Chapter 7.5 for a very good overview on the method.

The s-function in GAM allows you to specify how the GAM is fitted. You have not supplied k, so some default is chosen:

GAM basically does several linear regressions (specified by k) along the x-axis if you want to say so. Thus, GAM allows to model wild non-linearity. If you want to check linearity in your data, you should check different values of k and look at the plot. 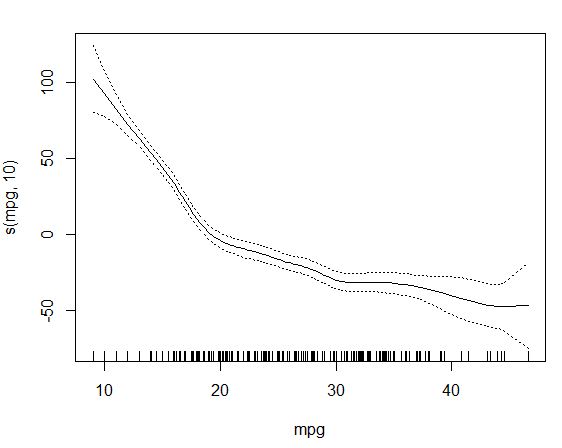 Would you conclude that your model is linear? No. In the range between about ]mpg=0 to mpg=20[ there is a linear relation as well as betweeen ]mpg=20 to mpg=40[. But linearity does not hold for the entire range of data. So I would differentiate these segments, e.g. by dummy encoding and interaction terms.

Note that the y-axis is rescaled. So there is no natural interpretation of the y-axis here.

To deal with non-linearity non-parametric regression is an obvious alternative. What happens if we do NP? 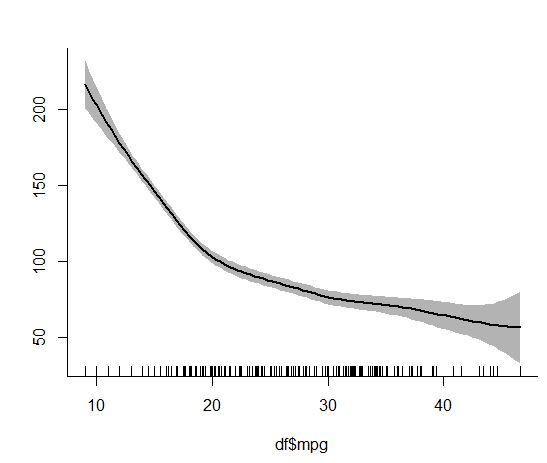 As you can see NP delivers almost the same result. However, the y-axis in the figure has a natural interpretation, which can be useful.

What about your Problem:

First make sure that you check different values for k in s(...,k), so check different number of knots and see how the figure changes. Also have a look at the book to understand the background.

In your current figure, I see some kinks at about x=10 and x=20. However, I would not say that this is severe non-linearity (but there is non-linearity in the data). Generally, if you can draw a line over the plot range (along the x-axis), and if this line is not outside your confidence bands, you can claim for a linear relationship.

The z-value (see glm output) shows predictor variable (temperature at lag0) has a statistically significant positive effect on the cardiovascular admissions. A substantive value of chi-square also support the idea of major effect of temperatures.(Note that p-value indicates the observed sample is random i.e. randomly distributed). The Graph is showing the GAM part . In no case,it evaluates whether there is a linear or the non-linear association.

Not the answer you're looking for? Browse other questions tagged r statistics correlation glm interpretation or ask your own question.