How to define a neural model as linear or non linear 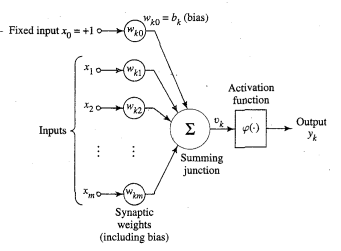 TL;DR: in what sense is the model of a neuron seen in the image above nonlinear?

In chapter 1, section 1.3 MODELS OF A NEURON of Simon Haykin's Neural Networks book, the standard model of a single neuron is described and visualised in the picture above.

I realise that this isn't a major concern, but I'd like to understand every part of the book before moving on, and this has been bugging me since I saw it.

Thanks to everyone in advance for your answers.

If the activation function is for example the identity function, your model won't be non linear, even if you stack multiple hidden layers. Indeed, the output of the neurons will only just be a linear composition of the inputs combined with weights.

I guess it is the same for the Piecewise Linear Unit (PLU) activation function.

Not the answer you're looking for? Browse other questions tagged neural-network beginner or ask your own question.

31
Why is ReLU used as an activation function?