The Sutton book does not mention what the initial estimate is for q*(a) before the first reward is received. In this code repo that seems to go along with the book: Sutton code repo

They have initialized it with 0 per snippet below:

But the explanation for Figure 2.1 that shows the distribution of rewards for the 10 arms of the bandit says,

So should I initialize instead with np.random.randn()? 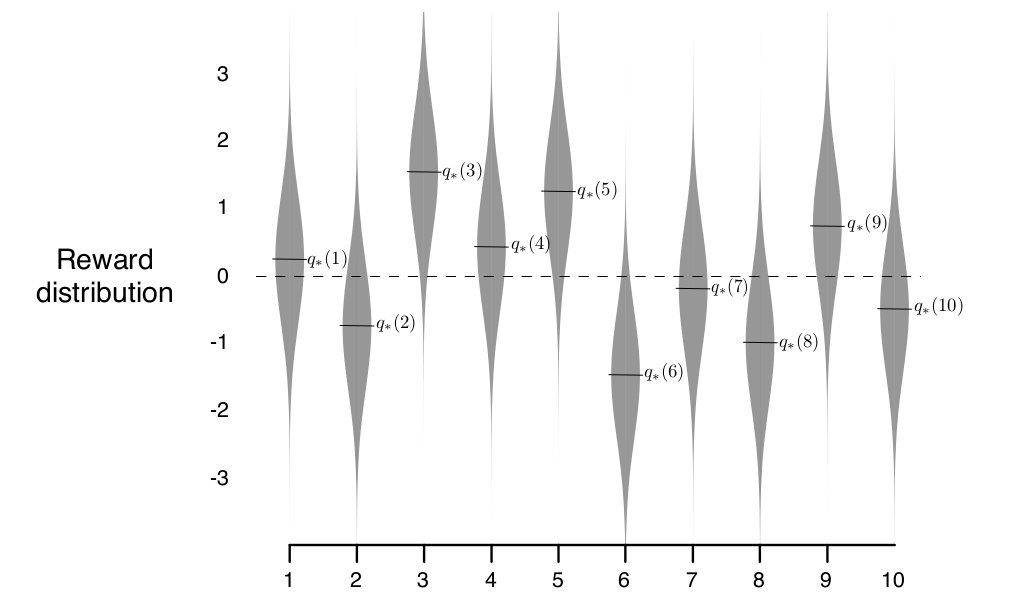 The description you quote explains how the true values will be set in the test when setting up a test run. This is necessary to fully state how the test works.

Initialisation of your estimates is a different issue. If you know something about the distributions of the true action values, then it would make sense to use that. For instance you could set all action values to the mean expected true value. Which is $0$. However, you may also use $0$ if you have no idea about true values, as it is a simple arbitrary value.

Setting the estimates to something using the same distribution is not unreasonable, as it that itself is an unbiased estimate of the same mean. However, it does not really serve you well here, because it adds variance to the initial estimates (as well as possibilty of them being closer to true values, they are equally likely to be worse) and on average slowing down some agent types slightly.

Not the answer you're looking for? Browse other questions tagged reinforcement-learning randomized-algorithms or ask your own question.

2
What is the reward function in the 10 armed test bed?
2
Testing Multi-Arm Bandits on Historical Data
0
contextual bandits for online learning
0
Different Initial Q-Values in Q-Learning
1
Matrix notation in Sutton and Barto