What is the "dying ReLU" problem in neural networks?

Referring to the Stanford course notes on Convolutional Neural Networks for Visual Recognition, a paragraph says:

"Unfortunately, ReLU units can be fragile during training and can "die". For example, a large gradient flowing through a ReLU neuron could cause the weights to update in such a way that the neuron will never activate on any datapoint again. If this happens, then the gradient flowing through the unit will forever be zero from that point on. That is, the ReLU units can irreversibly die during training since they can get knocked off the data manifold. For example, you may find that as much as 40% of your network can be "dead" (i.e. neurons that never activate across the entire training dataset) if the learning rate is set too high. With a proper setting of the learning rate this is less frequently an issue."

What does dying of neurons here mean?

Could you please provide an intuitive explanation in simpler terms.

A "dead" ReLU always outputs the same value (zero as it happens, but that is not important) for any input. Probably this is arrived at by learning a large negative bias term for its weights.

In turn, that means that it takes no role in discriminating between inputs. For classification, you could visualise this as a decision plane outside of all possible input data.

Once a ReLU ends up in this state, it is unlikely to recover, because the function gradient at 0 is also 0, so gradient descent learning will not alter the weights. "Leaky" ReLUs with a small positive gradient for negative inputs (y=0.01x when x < 0 say) are one attempt to address this issue and give a chance to recover.

The sigmoid and tanh neurons can suffer from similar problems as their values saturate, but there is always at least a small gradient allowing them to recover in the long term.

Let's review how the ReLU (Rectified Linear Unit) looks like : 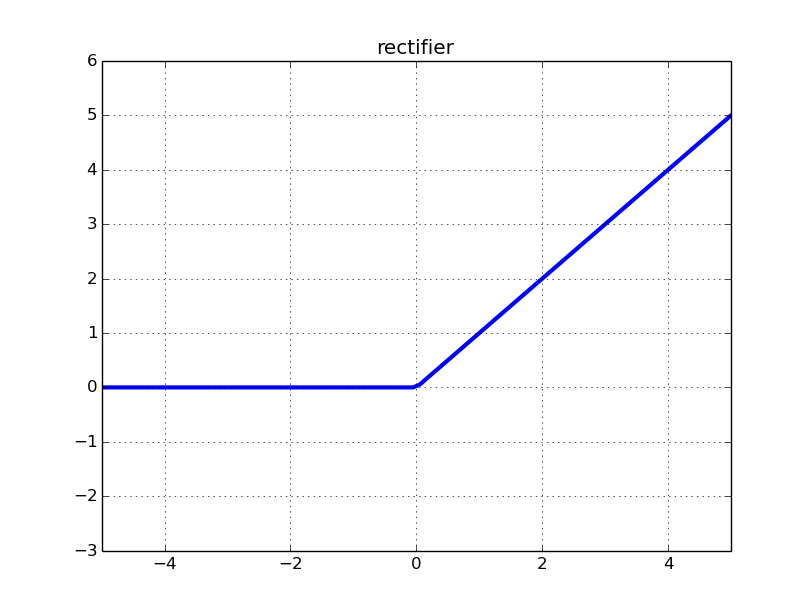 One question that comes to mind is how actually ReLU works "at all" with the gradient $=$ 0 on the left side. What if, for the input $x_n$, the current weights put the ReLU on the left flat side while it optimally should be on the right side for this particular input ? The gradient is 0 and so the weight will not be updated, not even a tiny bit, so where is "learning" in this case?

The essence of the answer lies in the fact that Stochastic Gradient Descent will not only consider a single input $x_n$, but many of them, and the hope is that not all inputs will put the ReLU on the flat side, so the gradient will be non-zero for some inputs (it may be +ve or -ve though). If at least one input $x_*$ has our ReLU on the steep side, then the ReLU is still alive because there's still learning going on and weights getting updated for this neuron. If all inputs put the ReLU on the flat side, there's no hope that the weights change at all and the neuron is dead.

A ReLU may be alive then die due to the gradient step for some input batch driving the weights to smaller values, making $z_n < 0$ for all inputs. A large learning rate amplifies this problem.

As @Neil Slater mentioned, a fix is to modify the flat side to have a small gradient, so that it becomes $ReLU=max(0.1x,x)$ as below, which is called LeakyReLU. 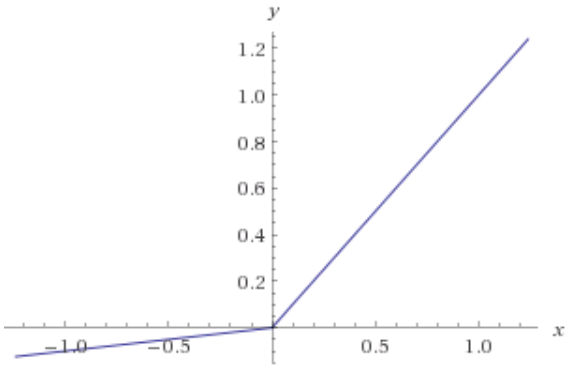 ReLU neurons output zero and have zero derivatives for all negative inputs. So, if the weights in your network always lead to negative inputs into a ReLU neuron, that neuron is effectively not contributing to the network's training. Mathematically, the gradient contribution to the weight updates coming from that neuron is always zero (see the Mathematical Appendix for some details).

What are the chances that your weights will end up producing negative numbers for all inputs into a given neuron? It's hard to answer this in general, but one way in which this can happen is when you make too large of an update to the weights. Recall that neural networks are typically trained by minimizing a loss function $L(W)$ with respect to the weights using gradient descent. That is, weights of a neural network are the "variables" of the function $L$ (the loss depends on the dataset, but only implicitly: it is typically the sum over each training example, and each example is effectively a constant). Since the gradient of any function always points in the direction of steepest increase, all we have to do is calculate the gradient of $L$ with respect to the weights $W$ and move in the opposite direction a little bit, then rinse and repeat. That way, we end up at a (local) minimum of $L$. Therefore, if your inputs are on roughly the same scale, a large step in the direction of the gradient can leave you with weights that give similar inputs which can end up being negative.

In general, what happens depends on how information flows through the network. You can imagine that as training goes on, the values neurons produce can drift around and make it possible for the weights to kill all data flow through some of them. (Sometimes, they may leave these unfavorable configurations due to weight updates earlier in the network, though!). I explored this idea in a blog post about weight initialization -- which can also contribute to this problem -- and its relation to data flow. I think my point here can be illustrated by a plot from that article:

The plot displays activations in a 5 layer Multi-Layer Perceptron with ReLU activations after one pass through the network with different initialization strategies. You can see that depending on the weight configuration, the outputs of your network can be choked off.

From this you can see that if the outputs are always negative, the weights leading into the neuron are not updated, and the neuron does not contribute to learning.

Such large negative updated gradient produce a large negative $w_i$ when learning rate is relatively big, hence will repress updates that going to happen in this neuron, since is almost impossible to put up a large positive number to offset the large negative number brought by that "broken" $w_i$.

The "Dying ReLU" refers to neuron which outputs 0 for your data in training set. This happens because sum of weight * inputs in a neuron (also called activation) becomes <= 0 for all input patterns. This causes ReLU to output 0. As derivative of ReLU is 0 in this case, no weight updates are made and neuron is stuck at outputting 0.

40
Why is ReLU used as an activation function?
20
Why ReLU is better than the other activation functions
8
Why my training and validation loss is not changing?
13
How to check for dead relu neurons
10
Relu does have 0 gradient by definition, then why gradient vanish is not a problem for x < 0?
4
Why do CNNs with ReLU learn that well?
3
Why is the "dying ReLU" problem not present in most modern deep learning architectures?
2
If ReLU is so close to being linear, why does it perform much better than a linear function?
1
Vanishing gradient problem even after existence of ReLu function?
1
Bias of 1 in fully connected layers introduced dying relu problem
See more linked questions

13
How to check for dead relu neurons
1
Convolutional Neural networks
3
Setting up Neural Network for this problem
4
What's the correct reasoning behind solving the vanishing/exploding gradient problem in deep neural networks.?
6
Gradient Descent in ReLU Neural Network
3
Why the sigmoid activation function results in sub-optimal gradient descent?
3
Why is the "dying ReLU" problem not present in most modern deep learning architectures?
1
Vanishing gradient problem even after existence of ReLu function?