I suffer from "graphical dyslexia". I have trouble interpreting charts. So I pore over them for long periods of time. For the life of me, I can't figure out how the conclusion from this chart is: 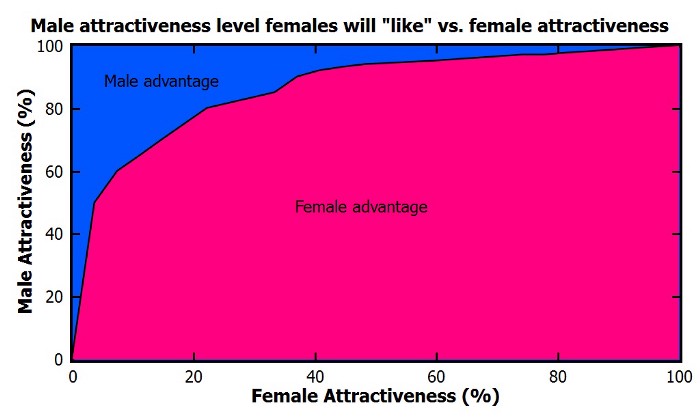 To be fair the concept of the graph is a bit special, I also struggled to get it.

As one can read in the source, the author takes number of "likes" on Tinder as a proxy for attractiveness. This way they can rank men and women separately by how attractive they are: that's what the two axes represent.

If one accepts a few questionable assumptions such as:

Then for each gender the average number of likes received by level of attractiveness is calculated, for example:

Beyond the caveats, my personal conclusion is: all you need is love... but can you afford it?

The statement is that the point (22,80) is on the barrier between the regions marked "Male advantage" and "Female advantage".

1
Data Interpretation with a double line graph
2
How to interpret this 'Zipf' (survival, war casualties) plot?
2
How to make this intersection chart?
3
What is this type of plot and how to interpret it?
3
Appropriate visualization for this kind of data
0
How to plot segmented bar chart (stacked bar graph) with Python?
1
How can I improve this chart?