In the case that I am programming I would like to use scikit, the yeast dataset available at: http://archive.ics.uci.edu/ml/datasets/yeast; and for example to tune the number of epochs.

First, I have separated my training, validation and test set by using the train_test_split twice according to one answer that I saw here. The loss plot that I got is the following for 1500 max iterations: 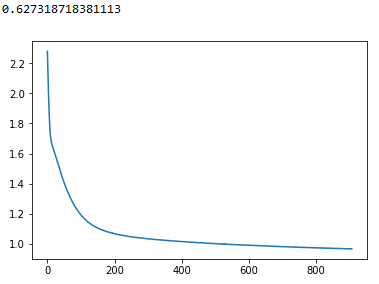 Then I wanted to use my validation set with a list of different values for the hypeparameter of max iterations. The graph I obtained is the following (with some warning messages of non-convergence for max_iter values less than 1500): 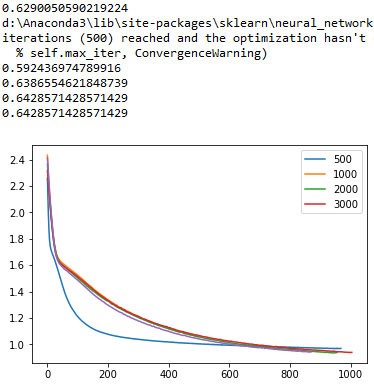 So, I have the first question here. It seems that for a value of max_iter of 3000 the accuracy is 64% approximately, so I should choose that value for the max_iter hyperparameter; is that correct? I can see from the graph that also the red line of 3000 has a less value of loss than the other compared options.

My program so far is the following:

Second question, is my approach valid? I have seen a lot of information over the web and all point to cross validation for hyperparameter tuning, but I want to perform it with a validation set.

PD. I have tried early stopping and the results are poor compared to the ones obtained with the method I programmed.

It seems to me that you're manually iterating through the hyper-parameters.

scikit-learn has a number of helper functions that make it easy to iterate through all of the parameters using various strategies: https://scikit-learn.org/stable/modules/grid_search.html#grid-search

Secondly, if I was 'manually' tuning hyper-parameters I'd split my data into 3: train, test and validation (the names aren't important)

I'd change my hyper-parameters, train the model using the training data, test it using the test data. I'd repeat this process until I had the 'best' parameters and then finally run it with the validation data as a sanity check (should have similar scores).

With scikit-learn's helper functions, I just split the data into two parts. Use GridSearchCV with one part and then at the end using the best parameters (stored in the attribute best_estimator_) run a sanity check with the second part.

As you can see you can avoid thinking too hard about whether CV was the right approach by using a final validation set as a sanity check.