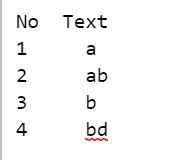 If the text in the 'Text column' matches with List, then need to add additional column matchedItem

So output should be

Please suggest on this..How to get this output after the join (with exact match and partial match)..

But this results in error TypeError: 'in ' requires string as left operand, not StringMethods

The question is presented in a somewhat confusing fashion. However, I'm assuming OP has a dataframe setup something like this:

In addition to the df file, OP has a kpi list consisting of 'a' and 'b'. There is also a mask variable, which I am assuming was meant to catch all cases where the df.Text is equal to either 'a' or 'b'. This is where the first mistake is. The way OP wrote that line would match cases where the character a is in any part of the element. In other words 'a' in 'ab' is True. I suspect, OP wanted that statement to be False, which meant it needs to be written as 'a' == 'ab' which would be false. I fixed it in the lines below:

Basically I changed the item.lower() in x to item.lower() == x. Next, OP indicated that there should be a new column called matchedItem, which duplicates the df.Text when there was a match and '----' when there was not a match. Given the mask variable that OP had written, this can be done simply as such:

In other words, first I set '----' as the default value for all the elements in column matchedItem. Next, I copy over the elements from column Text only for the rows identified in the mask variable. This results in the following output for print( df ):

There's a number of things that are unclear on the asking of this question (e.g. did OP really want to set mismatches as '----'? Is No supposed to be an index or a separate column? etc.), but hopefully this answer will guide OP towards the desired result.

Not the answer you're looking for? Browse other questions tagged dataframe or ask your own question.