Is there a method that is opposite of dimensionality reduction?

I am new to the field of machine learning, but have done my share of signal processing. Please let me know if this question has been mislabeled.

I have two dimensional data which is defined by at least three variables, with a highly non-linear model way too complicated to simulate.

I have had varying level of success at extracting the two main components from the data using methods like PCA and ICA (from the python library Scikit-Learn), but it seems these method (or at least, these implementation of the methods) are limited to extracting as many components as there are dimensions in the data, for example, 2 components from a 2D point cloud.

When plotting the data, it is clear to the trained eye that there are three different linear trends, the three color lines show the directions. 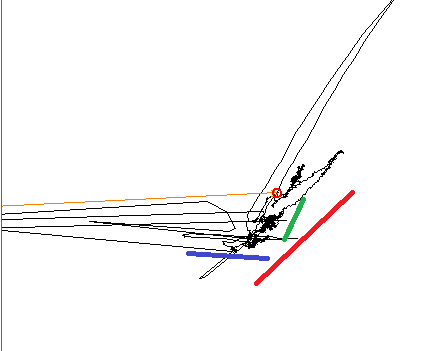 EDIT, Additional info: I am here working in a small subset of a bigger phase plane. In this small subset, each input variables produce a linear change on the plane, but the direction and amplitude of this change is non-linear and depends on where exactly on the bigger plane I am working. At some places, two of the variables can be degenerate: they produce change in the same direction. for example, say the model depends on X, Y, and Z. A change in the variable X will produce a variation along the blue line; Y causes a variation along the green line; Z, along the red one.

The short answer is yes.

Essentially you will be performing some sort of feature engineering. This means constructing a series of functions of your data, often:

Which, strung together, define a transformed data vector $\boldsymbol \phi(x)$ of length $K$.

There are a number of ways, better and worse, of doing this. You may want to look up terms like:

As you might guess from such a varied bag of techniques, this is a large area. It goes without saying really but care has to be taken to avoid overfitting.

This paper Representation Learning: A Review and New Perspectives deals with some of the issues around what makes a particular set of features 'good', from a deep learning perspective.

I guess you are looking for features which extract out new features. A feature which best represents the dataset. If that is the case then we call such method "feature extraction".

Not the answer you're looking for? Browse other questions tagged machine-learning scikit-learn or ask your own question.