I am trying to build a classifier that detects if I have a malaware by predicting the provenance compiler. To do so I have a dataset composed of assembly code in json format :

In particular, I want to select as features the instructions, so the push, mov, jmp,..etc and create a feature vector that contains the number of times a feature appears. So, I want to apply the bag of words. To do so my code is the following:

and from this I obtain a dictionary:

with more and more key, value pairs. At this point what I tried to do is to eliminate the registers so my idea to do this is to iterate the dictionary and eliminate the keys that have numbers, and so I have written the following:

but actually it wasn't a really good idea because I have also registers without numbers, for example rdi.

At this point, I don't know how to move, and I am not sure I am going in the correct way. Can somebody please help me? Thank's in advance.

[EDIT 2] Now I am trying to take the json file, not opening it with pandas, but open it as a dictionary, so: 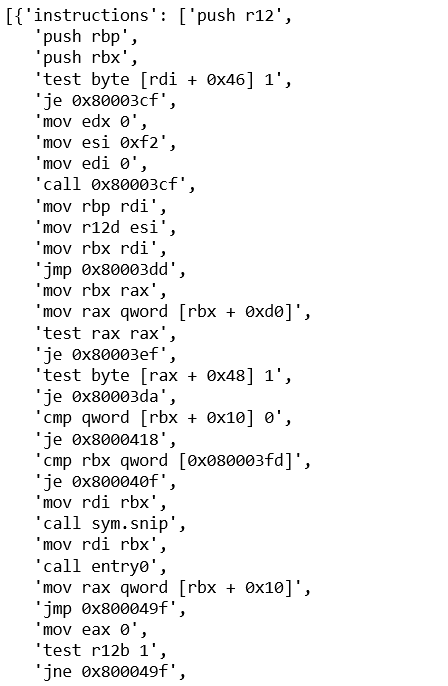 and my intenction is try to split, as suggested, each key in such a way to eliminate the registers. So, my code for this is :

but I recieve the following error message:

I am getting really confused about how to operate now.

[EDIT 3] or I tried to do the following:

but it gives me the following error message:

a problem I think is the fact that the various push r12,.. etc are in a list, so I don't know how to do.

[EDIT 4] I actually tried to solve the above problem this way:

but again I get the error message:

[EDIT 5] Now, I am trying to do this using the file opened with pandas, so:

but still I get the following error:

or I tried also:

but get the same error as above.

In particular, I want to select as features the instructions, so the push, mov, jmp,..etc and create a feature vector that contains the number of times a feature appears.

i.e. a list of instructions, then define opcodes[i] as

Now you can create feature vectors out of collections of such opcodes.

Not the answer you're looking for? Browse other questions tagged machine-learning python scikit-learn or ask your own question.

6
Use of TfidfVectorizer on dataframe
1
Problem building dictionary from series
0
Calling function on a list object
0
How to create dictionaries out of pandas dataframes?
0
Problem importing dataset
0
problem submitting classification problem
2
How to download COCO dataset images?
0
Problem extracting words from dataframe