How can different classification algorithms expressed as neural networks?

I have heard that each of the different classification algorithms can be expressed as a neural network architecture.

The Universal Approximation Theorem guarantees that neural networks can approximate any function on a closed subset of $\mathbb{R}^n$. So we are theoretically guaranteed that any function specified by a logistic regression model, SVM, ELM, or any other model can also be expressed by a neural network.

Is there a way to convert the vector equation of a classification algorithm into neural network architecture?

This part may be hard depending on the model. Although the universal approximation theorem guarantees that an equivalent network exists, it offers no information about the network's weights or number of hidden units. Nonetheless, let's give it a shot for the three models you mentioned:

This one is easy. ELMs are already neural networks, so there's nothing left to be done.

Here's a diagram showing the neuron: 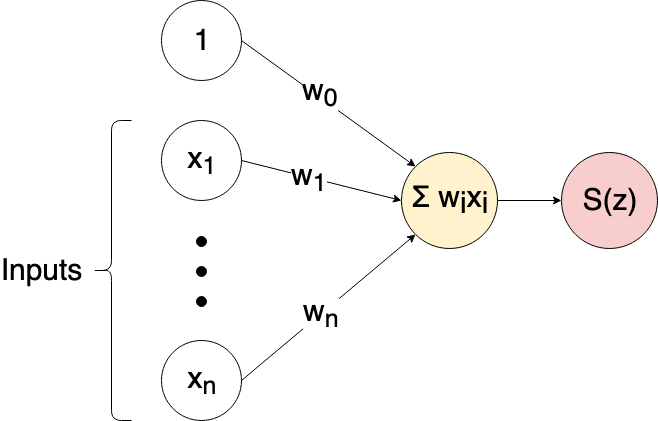 The situation would be more complex for multinomial logistic regression, but you get the idea.

This one is probably the trickiest of the three, since an SVM's kernel function can be non-linear. Again, let's consider a binary classification problem.

Of course, the actual classification is determined by which side of the hyperplane a point lies, so the classifier can be written $f(\vec{x}) = sign(\vec{w} \cdot \vec{x} - w_0)$, with 1 denoting the positive class and -1 denoting the negative class.

As with logistic regression, it's pretty easy to represent the decision boundary with a single neuron. A neuron with inputs $\vec{x} = \langle x_1, . . . x_n \rangle$ with weights $\vec{w} = \langle w_1, . . . w_n \rangle$ and with bias term $\hat{w_0} = -w_0$ describes the decision boundary of a linear SVM. This is the same neuron as the one associated with logistic regression, except there is no activation function and the bias term has its sign flipped: 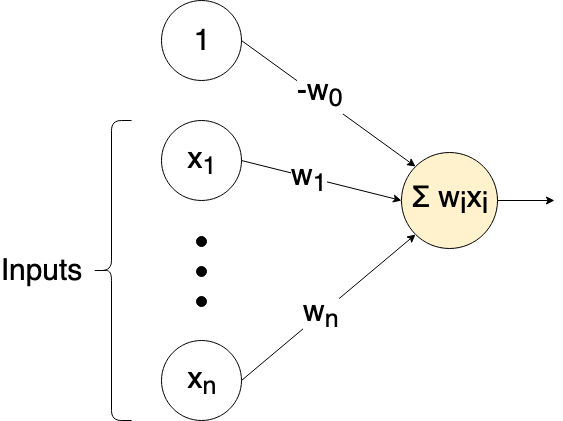 However, it's exceedingly common for SVMs to use the kernel trick to find non-linear decision boundaries. When the kernel is non-linear, the translation of an SVM to a neural network is not so straightforward. I imagine you could find an equivalent network by using the kernel function as the activation function for each neuron, but off-hand I can't describe exactly how it would work.

Not the answer you're looking for? Browse other questions tagged machine-learning neural-network classification svm or ask your own question.

4
Can all statistical algorithms be parallelized using a Map Reduce framework
2
Reason behind choosing Neural Network for classification
9
What's the relationship between an SVM and hinge loss?
2
Understanding genetic algorithms
4
Is it possible for a ML model to perform worse than random classification?
5
Is the prediction algorithm absolutely the same for all linear classifiers?
0
Logistics regression with polynomial features vs neural networks for classification