Why in this case are gradient steps not perpendicular to contour lines?

There is a theorem that gradient at point is perpendicular to tangent line to contour line at given point. Why in this picture it seems that this rule is not respected? 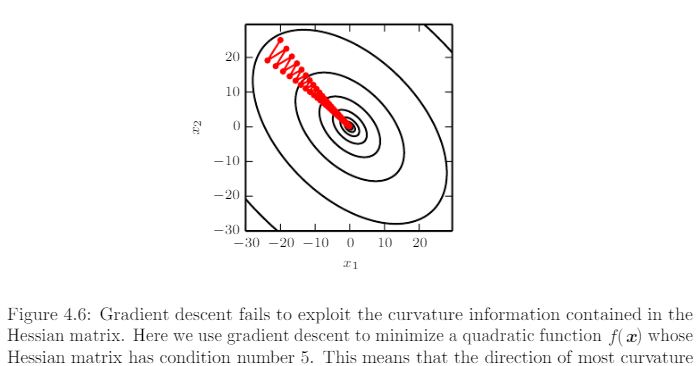 And also in this case:

In second case it is even weirder because the steps don't seem to be perpendicular to contour lines but to previous gradient vector? Am I missing something or treat images to serious? Thank in advance and regards.

That would be the case if the steps taken by gradient descent are "infinitesimal" in the mathematical sense. But in fact, it takes steps with some finite length defined by the learning rate. But the problem is, the gradient is calculated at each point, and does not really calculate how the slope changes at some finite length later. If you choose a large learning rate, you may "offshoot" from the optimal direction as shown in the figure. If you choose a small enough learning rate those oscillations will be minimal and you may move "almost" perpendicular to the contour lines and look like what you describe in the question, but it will take a very long time to complete training.

The second part of the question refers to the section titled "Conjugate Gradients" and it refers to a specific optimization method. The reason for the perpendicular lines in the second part is because of the vanishing gradient at the turning points. Quoting the text:

Such a point is where the "directional derivative" with respect to theta, theta being the parameter in a given direction vanishes. When the derivative vanishes with respect to the parameter of the direction, The only possible way to go will be in a perpendicular direction. That is why they are called "conjugate" to each other, hence the name of the optimization method. This is detailed in the text above the figure.

Not the answer you're looking for? Browse other questions tagged deep-learning gradient-descent linear-algebra books or ask your own question.