I want to know the details of feature importance computing of random forest with gini index. I refer to this Chinese blog:https://www.jianshu.com/p/7a876bb876b9. But I don't understand clearly these mathematical forms in blog.

As the node m after twos branches(Il, Ir) splitting, the gini index is computing as following

And feature Xj in the decision ith tree ,and be in nodel of M set, and the feature importance of Xj in the ith tree is computing as following:

And I confusing about M set, what's the meaning of M set? I think that the feature Xj in ith tree just one node not a M set? If you guys have detailed computing method, please tell me!

Let's start with this formula for the Variable Importance Measure (VIM) based in Gini Impurity (GI)*:

Here, $m$ is a given node in a single decision tree which performs a split on feature $j$. For this node you can compute the Gini Impurity $GI_m$ (see * note at the very bottom for the formula). Now this node has two childs: a left node $l$ and a right node $r$. For these the Gini Impurities are $GI_l$ and $GL_r$ respectively. If you substract the Gini impurities of the child nodes from the Gini Impurity of node $m$, then you know by how much the split performed by this node has decreased the overall Gini Impurity. Because before the split it was $GI_m$ and after the split the remaining impurity is the sum of $GL_l$ of $GL_R$. Therefore, the difference ($GI_m - (GI_l + GL_r) = GI_m - GI_l - GL_r$) is the corresponding impurity reduction.

(as a side node: this is the unweighted gini importance calculation since $GI_l$ and $GI_r$ are considered with equal weights. There are also different weighted versions. For details and a comparison please refer to "The effect of splitting on random forests", Hemant Ishwaran, Mach Learn (2015) 99:75–118)

For feature importance however, you're interested in the overall importance of each feature and not a single node. And a given feature can be present in different branches of a tree.

Here is an example: 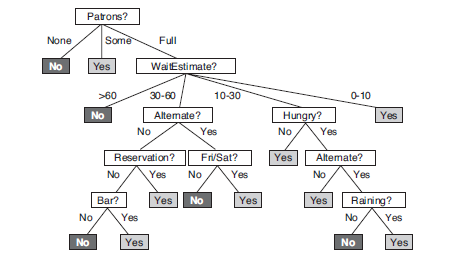 As you can see "Alternate?" is being used at multiple nodes. That is why they use set $M$ in the blog you posted to derive the overall importance of a feature $j$ in a tree $i$:

As a side node: in some papers and books the authors do not calculate the impurity indexed by features $j$ but indexed by a split value of a given node, e.g. $s$, (which of course operates on features). Don't get confused by that.

Not the answer you're looking for? Browse other questions tagged feature-selection random-forest machine-learning-model or ask your own question.