I'm building an FX trading model where I'm trying to predict the +/- movement of a currency pair 5 minutes into the future. I've had some promising results adapting the model as a classifier (i.e., buy if the currency pair is expected to increase by more than some threshold, sell if the pair is expected to decrease by some threshold, or do nothing otherwise), but when trying to create even the simplest multi-layer perceptron regression model, the mean of predicted values bounces around the mean of actual y values (as expected, this is very close to zero).

The two images below depict the train predictions (green) versus the actual y_train values (blue) after two different epochs after a number of epochs had already been completed. Rather than move towards the true y mean in some stable way, the prediction mean flies right past it and will seemingly do this over and over with more epochs. 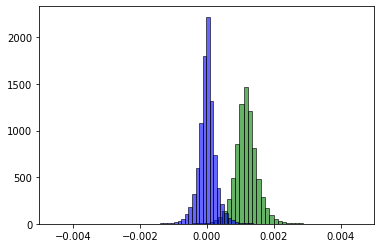 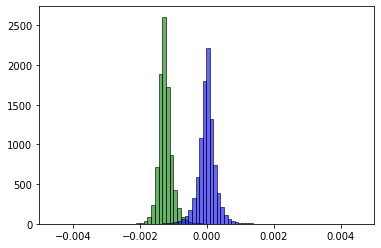 This is happening even with a very simple model such as this:

Any suggestions as to how I can stabilize the model?

You may need to spend more time identifying the problem than looking for tricks that have worked in literature. So start with the simplest architecture and see how and on what values your network is converging. It's hard to know all the details but here are a few suggestions that might help.

Not the answer you're looking for? Browse other questions tagged neural-network deep-learning keras tensorflow regression or ask your own question.

2
My Neural network in Tensorflow does a bad job in comparison to the same Neural network in Keras
6
Why is predicted rainfall by LSTM coming negative for some data points?
1
Tensorflow model works for classification but not for regression (all predictions equal the output layer bias)
2
Training accuracy is ~97% but validation accuracy is stuck at ~40%
0
Why deep feedforward neural networks are restricted to solve classification problems?
2
How to decide if gradients are vanishing?