What would I prefer - an over-fitted model or a less accurate model?

On the one hand, model #1 is over-fitted but on the other hand it still yields better performance on an unseen test set than the good general model in #2.

Which model would you choose to use in production? The First or the Second and why?

There are a couple of nuances here.

Given this, personal opinion: Second one.

Better to catch general patterns. You already know that first model failed on that because of the train and test difference. 1% says nothing.

It depends mostly on the problem context. If predictive performance is all you care about, and you believe the test set to be representative of future unseen data, then the first model is better. (This might be the case for, say, health predictions.)

There are a number of things that would change this decision.

(One last note: the first model may well be amenable to some sort of regularization, which will trade away training accuracy for a simpler model and, hopefully, a better testing accuracy.)

The first has an accuracy of 100% on training set and 84% on test set. Clearly over-fitted.

Maybe not. It's true that 100% training accuracy is usually a strong indicator of overfitting, but it's also true that an overfit model should perform worse on the test set than a model that isn't overfit. So if you're seeing these numbers, something unusual is going on.

If both model #1 and model #2 used the same method for the same amount of time, then I would be rather reticent to trust model #1. (And if the difference in test error is only 1%, it wouldn't be worth the risk in any case; 1% is noise.) But different methods have different characteristics with regard to overfitting. When using AdaBoost, for example, test error has often been observed not only to not increase, but actually continue decreasing even after the training error has gone to 0 (An explanation of which can be found in Schapire et. al. 1997). So if model #1 used boosting, I would be much less worried about overfitting, whereas if it used linear regression, I'd be extremely worried.

The solution in practice would be to not make the decision based only on those numbers. Instead, retrain on a different training/test split and see if you get similar results (time permitting). If you see approximately 100%/83% training/test accuracy consistently across several different training/test splits, you can probably trust that model. If you get 100%/83% one time, 100%/52% the next, and 100%/90% a third time, you obviously shouldn't trust the model's ability to generalize. You might also keep training for a few more epochs and see what happens to the test error. If it is overfitting, the test error will probably (but not necessarily) continue increasing.

Obviously the answer is highly subjective; in my case clearly the SECOND. Why? There's nothing worse than seeing a customer running a model in production and not performing as expected. I've had literally had a technical CEO who wanted to get a report of how many customers have left in a given month and the customer churn prediction model. It was not fun :-(. Since then, I strongly favor high bias/low variance models.

These numbers suggest that the first model is not, in fact, overfit. Rather, it suggests that your training data had few data points near the decision boundary. Suppose you're trying to classify everyone as older or younger than 13 y.o. If your test set contains only infants and sumo wrestlers, then "older if weight > 100 kg, otherwise younger" is going to work really well on the test set, not so well on the general population.

If I absolutely had to choose one, I would take the first, but with trepidation. I'd really want to do more investigation. What are the differences between train and test set, that are resulting in such discrepancies? The two models are both wrong on about 16% of the cases. Are they the same 16% of cases, or are they different? If different, are there any patterns about where the models disagree? Is there a meta-model that can predict better than chance which one is right when they disagree?

It seems a lot of people misunderstand overfitting here. Overfitting is not the gap between train and test performance. Overfitting is when you add complexity to a model, and there is no return on investment, or, most times, a loss in return.

See page 38 of Elements of Statistical Learning for the graph below. An overfit model is one that is to the right of the minimum of test error. Notice that for the best-fitting model, the gap between train and test is still relatively high. The correct answer is to choose the model with 84% accuracy, assuming you know that the 1% difference is statistically significant. I'm of course also assuming interpretability is not of concern here. 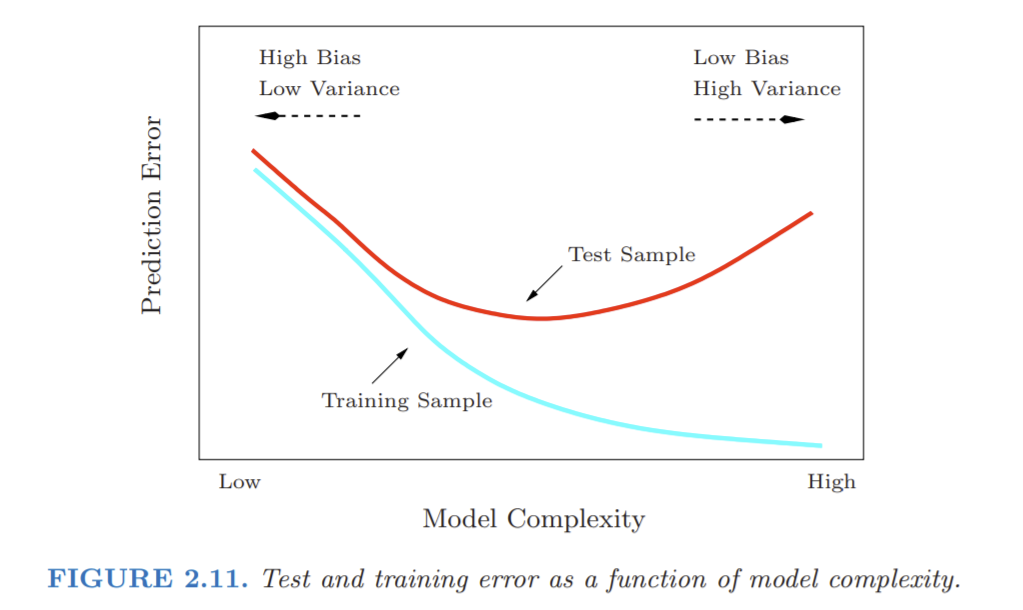 If your options are indeed "100% on train / 84% on validation" vs "83% on train / 83% on validation", I'd feel safer with the second one - but really, I'd take a third option: Try and tweak the first model to reduce overfitting (with the usual methods), hopefully squeezing a bit more accuracy out of it.

Primarily, go for CV for the training and test set. If you still get the same type of result, then choose the second model.

The first model has a very large difference in accuracy between the training and test set. It is a very specific model. There is a chance that the high accuracy on the test set appeared due to data leakage.

The second model is a more general purpose model with acceptable accuracy results on both sets.

Not the answer you're looking for? Browse other questions tagged machine-learning-model training supervised-learning accuracy overfitting or ask your own question.

8
Is over fitting okay if test accuracy is high enough?
2
Which model is better, one just before overfitting with higher accuracy or one with no overfitting and lower accuracy?
11
What is the proper way to use early stopping with cross-validation?
6
Disparity between training and testing errors with deep learning: the bias-variance tradeoff and model selection
5
Can we use a model that overfits?
2
Is it better to have higher train accuracy with lower test accuracy or higher test accuracy with lower train accuracy?
2
What to choose: an overfit model with higher evaluation score or a non-overfit model with lower one?
2
How to select the best model from validation/training/holdout accuracy score

1
Query regarding neural network model
4
What does a predicted probability really mean, without considering the accuracy of the underlying model?
0
Titanic Kaggle Data: Why am I getting lower accuracy on Kaggle submissions than on held-out data?
4
Performance of model in production varying greatly from train-test data
1
Is it bad to have a large gap between training loss and validation loss?
2
What to choose: an overfit model with higher evaluation score or a non-overfit model with lower one?
1
Hyperparameter tunning for Random Forest- choose the best max depth
1
Measure performance of classification model for training on different snapshots