I fount simple neural scenario sayinh : network having 3 layers, 3 inputs and 2 outputs. It should be trained to recognize a simple pattern - if inputs are correspondingly 6.0,7.0 and 8.0 then outputs should be 3.0 and 4.0, otherwise outputs should be 23.0 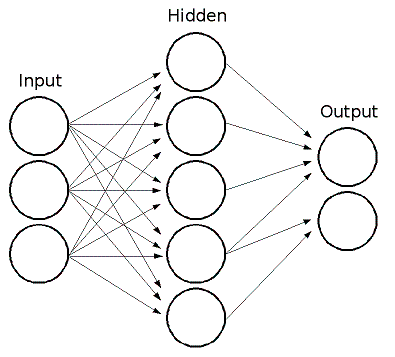 What I understand is, hidden layer should Check input pattern in sequence with simple if else condition.

Do I understand the problem correctly or something I am missing?

A layer in a neural network does not process logic of the kind you present. It cannot "check the input pattern with a simple if else pattern". You could make a model that processed your example inputs to example outputs as you show, but it would not be a neural network.

In machine-learning, neural networks have a formal, numeric structure. There are a few variations, but essentially in your diagram:

The above very roughly covers how many neural networks are constructed. As you can see though, there is no room in that for having your if/else statement.

Instead, neural networks like the one you show (technically a feed forward network also called a multi-layer perceptron or MLP) are most often trained by example. This involves repeatedly giving the network inputs where you know the output you want. To start with the network will give completely incorrect outputs, and you then adjust the weights to try and make the result closer. This is repeated very many times until the network becomes the best model it can for your purpose. A very common algorithm used to train a neural network in this way is backpropagation and gradient descent.

For your problem as described, a neural network is not a good model, and would not be used in the real world. That is because you already know the full logic of a simpler model that covers all possible inputs. At best with a neural network you will get an approximation to that already-perfect model.

However, if this is for the purposes of understanding neural networks, your approach would be roughly this:

Not the answer you're looking for? Browse other questions tagged machine-learning classification neural-network or ask your own question.

10
Debugging Neural Networks
1
Vanishing Gradient in a shallow network
0
Properly using activation functions of neural network
1
Why don't we gradually update the activation parameters in RNN from one activation to the next as the network is learning more?
4
What is the difference between a "cell" and a "layer" within neural networks?
2
Can my neural network learn conditional rules when classifying?
0
Would a neural network trained on extracted features have the same accuracy as a full network with frozen layers?
2
Learning a board game using a genetic neural network