How to interpret Correlation along with Coefficients of multiple linear regression ?£

The independent variables are all centered with 0 mean.

I found the correlation coefficients between each of these variables which are as below:

I used linear regression model and below is the summary of that model: 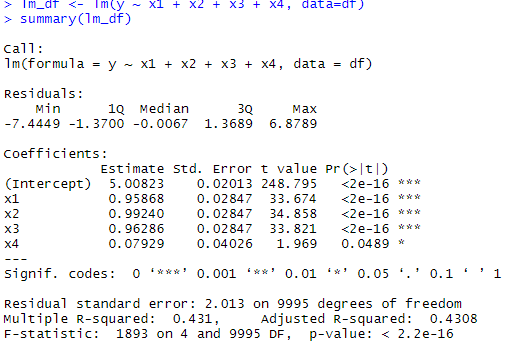 Now, based on the coefficients of the predictor variables in the linear regression model, I have been asked to find the significant predictor (s).

Also, Additionally even if I remove the x4 variable from the lm model, the Residual standard error remains the same which kinda re-iterates the fact the it is not a significant predictor? Is

Also, I ran the VarImp function available in R which again returned a smaller value for x4.

The coefficients from the regression table, on the other hand, describe the relation between y and the different x's all else being equal. For example, the coefficient estimate of x1 tells you that, provided x2 to x4 are held constant, y is expected to change by .959 units when x1 changes by 1 unit. To understand the relation between your y and the different x's, these coefficients are usually more informative than pairwise correlations.

So looking at your regression output, you can see that all four predictor variables have a statistically significant relation with y. X1 to x3 are more significant than x4, both in terms of statistical and substantive significance. The contrast between the strong pairwise correlation between x4 and y and the small regression coefficient is due to multicollinearity between the x's: x4 covaries with the other predictors, and it is this covariance which accounts for the correlation with y.

The correlation coefficient(.58 ) between the two variables (X4 and y is significant statistically given a very large sample. This positive relationship is corroborated by the multiple-regression model