I've implemented linear regression using sklearn and after all calculations I've got results like this:

P.S: I'm new to this "part" of StackExchange and ML\DS at all, so please if I do something wrong or I have to provide more information, let me know! Any help would be appreciated. Thanks in advance!

Large coefficients in linear regression are not necessarily a problem. They can be large becuase some variable was rescaled. You mentionned that you do some rescaling, but provide no details. Therefore it is not possible to tell what exactly is going on.

Here is a (general) example that explains how coefficients can get "large" (in R). Assume we want to model "visits" ($y$) contingent on "rating" ($x$):

The regression results are:

We can predict and plot our model. The results are just as expected, a positive linear function. 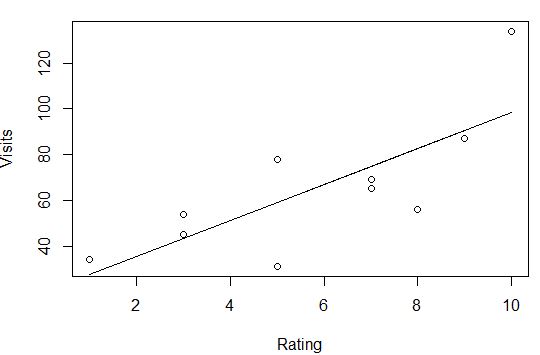 Now comes the interesting part: I do a linear transformation on $x$. Namely, I divide $x$ by some "large" number and I run the same regression as before:

As you see, the coefficient for rating is rather large now. However, when I predict and plot, I get basically the same results as before. The only thing that has changed is the "scale" of $x$ (the way $x$ is expressed). 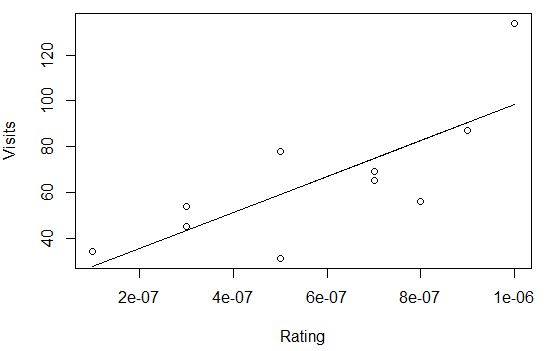 Let's compare the coefficient for rating in both regressions.

In the first case it was:

In the second case it was:

However, when I divide the coefficient rating2 by the same "large" number as I did to "rescale" the data, I get:

As you can see, the "rescaled" coefficient rating2 is exactly the same as the original coefficient for rating.

What can you do to check your regression:

Not the answer you're looking for? Browse other questions tagged python scikit-learn feature-selection linear-regression features or ask your own question.