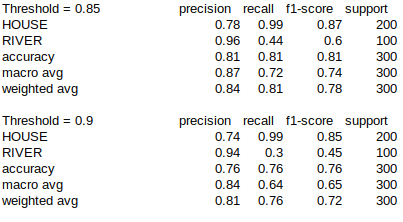 Both $\text{TP}$ and $\text{FP}$ are reduced when you increase the threshold. If both decrease in proportion to the current precision (i.e. they are spread evenly at each confidence value), then precision will remain the same. Most models on most datasets will tend to increase precision as the threshold increases, at least initially (e.g. moving from 0.5 to 0.6) as false positives may commonly be found as uncertain edge cases with low confidence, i.e. false positives tend to occur more frequently at low confidence, so increasing threshold will exclude a higher ratio of false positives than true positives than the current precision. However, there is no guarantee of that.

The value of precision will vary in practice depending on what the model predicted for each example. If you have a cluster of highly confident false positives, they can cause precision to drop as threshold grows, until they get excluded. The most extreme example would be where the most confident classification is incorrect, in which case the highest possible threshold will score zero precision. 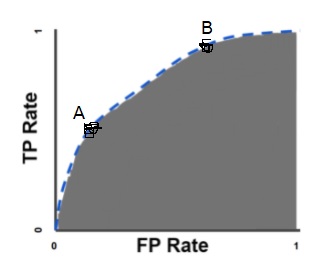 Not the answer you're looking for? Browse other questions tagged machine-learning deep-learning classification statistics data-science-model or ask your own question.

5
Sci-kit learn function to select threshold for higher recall than precision
1
ROC-AUC curve as metric for binary classifier without machine learning algorithm
3
Combining Classifiers with different Precision and Recall values
0
Maximize Precision Deep Learning
1
Given a list of thresholds in descending order will the corresponding FPRs and TPRs lists always be in ascending order?
2
SGDClassifier - Why do I need to use argmax instead of argmin to find the lowest threshold satisfying given precision?