I have an understanding of simple linear regression. Clear that 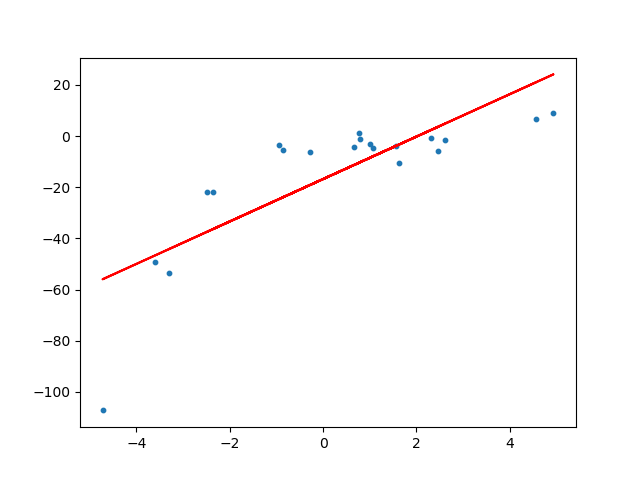 However, studying polynomial regression is a bit of a challenge having some questions about the process. I understand the idea that fitting a curviliear "line" could follow the data more precisely. But seeing the following Python code in scikit-learn:

suggests for me that here we "just" projecting the original features into 2nd degree new polynomial features, while still fitting the simple (straight) line on it. Still, we get the following solution with magically curved line: 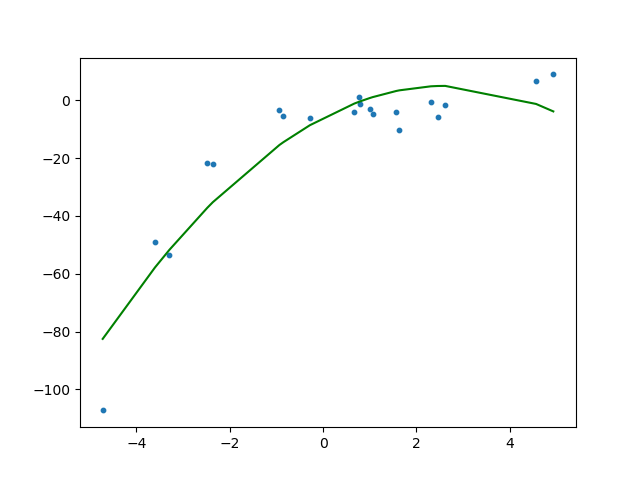 I cannot figure out here why does coefficients for a specific same feature (like x_1) increase just because there are more additional polynomials (e. g. x_2, x_3 etc) while stay low just being alone? Quite confusing.

"Linear regression" (aka. "ordinary least squares", OLS) refers to the type of estimator. Linear here means that you minimise the sum of squared residuals for a given (linear additive) regression equation. You can write a simple model:

This would fit a linear function with intercept $\beta_0$ and slope $\beta_1$. So the "fitted" function would be:

You can "propose" basically any functional form to be fitted by the linear model, e.g. with a squared term (just add $x^2$ as feature):

This will give you the (estimated) quadratic function:

"Non-linear" models (there is no really clear definition), would be e.g. logistic regresion, non-parametric regression, tree-based models, neural nets etc. While each coefficient $\beta$ directly gives you a "marginal effect" in linear (OLS) regression, this is not the case for the other (non-linear) models.

When you use regularisation in linear models, you simply add a penalty term to the loss function, so you minimise the sum of squared residuals given a penalty term. However, regarding your last question, I'm not quite sure what your actual question is.

It seems to me you did not understand what polynomial regression is.

Here I go with a worked example for answering mainly your first 2 questions, with some code based on this scikit-learn example. Let's generate a rough parabola as follows:

We can also plot, for demonstration reasons, the regression line we expect to obtain after fitting our model on this parabola: 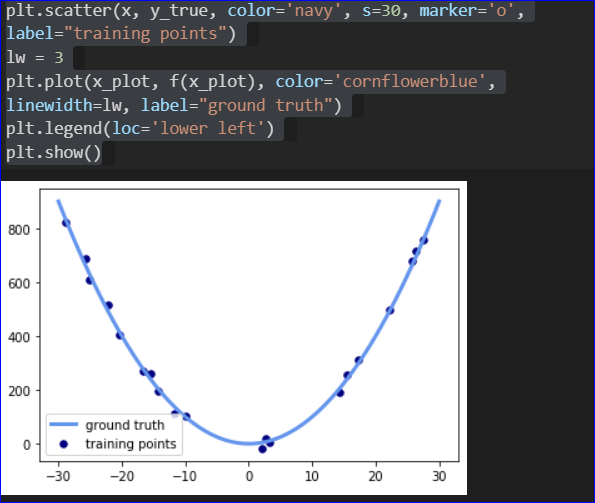 Now the question is indeed, how can we fit a linear model on this data? Let's add a higher dimensional feature (we expect degree 2 being enough):

If you plot it with the amazing plotly library, you can see the new 3D dataset (with the degree-2 new feature added) as follows (sorry I named 'z' the actual y values in this animated plot):

As you can see, the f(x) values (the z component in the plot) has a parabola form regarding the x values, but a linear shape regarding the x^2 values (y-axis on this animated plot)! This is the point.

And we can finally plot both the ground truth y values and the predictions, on the 3D dataset, checking that indeed a linear regression works perfectly by adding the x^2 values feature (here I finally named the y-axis for the y values :) ):

Not the answer you're looking for? Browse other questions tagged scikit-learn regression linear-regression regularization or ask your own question.

5
Difference between Ridge and Linear Regression