How can we use the cosine similarity formula on document feature vector without a direction?

In mathematics, a vector has both magnitude and direction.

In data science, for identifying document similarity we convert the document into a feature vector. Then apply cosine angle formula between the source and target document's feature vector.

However the cosine formula is applicable only for vectors. And a vector should have both magnitude snd direction. For a document that is represented as a vector, where is the direction?

classification vector-space-models
Share
Improve this question
asked May 17 '20 at 7:47

From this "Cosine similarity measures the degree to which two vectors point in the same direction, regardless of magnitude.

Here is a another nice explanation-

"When plotted on a multi-dimensional space, where each dimension corresponds to a word in the document, the cosine similarity captures the orientation (the angle) of the documents and not the magnitude. If you want the magnitude, compute the Euclidean distance instead.

The cosine similarity is advantageous because even if the two similar documents are far apart by the Euclidean distance because of the size (like, the word ‘cricket’ appeared 50 times in one document and 10 times in another) they could still have a smaller angle between them. Smaller the angle, higher the similarity." 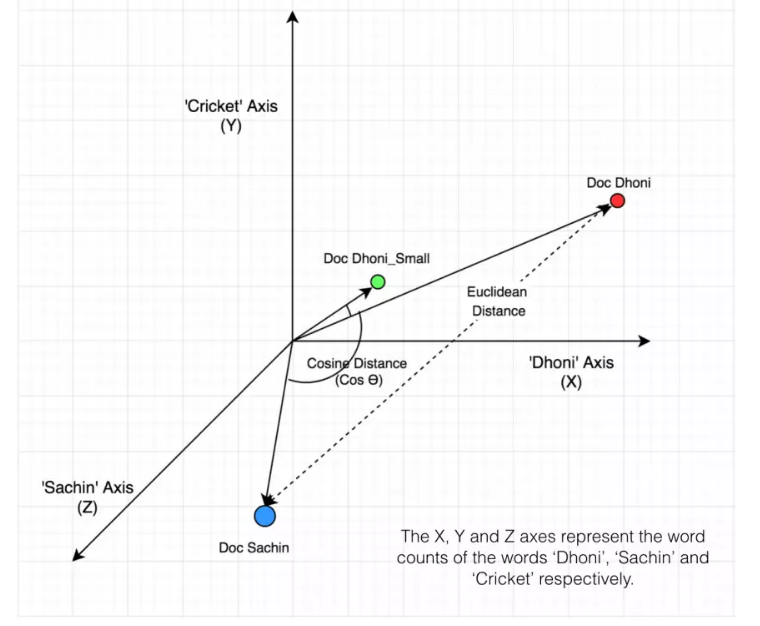 Not the answer you're looking for? Browse other questions tagged classification vector-space-models or ask your own question.

1
Classification when one class is other
1
Dense text representations
2
Confusion with cosine similarity
1
How to structure data and model for multiclass classification in SVM?
1
How to dual encode two sentences to show similarity score