Can an ordinal variable with a wide range be considered as a continuous integer variable in regression?

Just as a trivial example:

I have a sample of 25 children and I have gathered some information example: weight, age etc - to use as predictors.

Now, I don't have the height of the children, but I have an ordinal variable with the shortest child having a value of 1 and tallest child having the value of 25 - "classification wrt height" variable

If I wish to build a regression model, with the "classification wrt height" variable as the response variable, shall I consider it as ordinal or continuous integer variable please (to select the type of regression needed to be applied accordingly)?

Think carefully before you do this. You have no idea what the underlying height distribution is. Here are four possibilities. 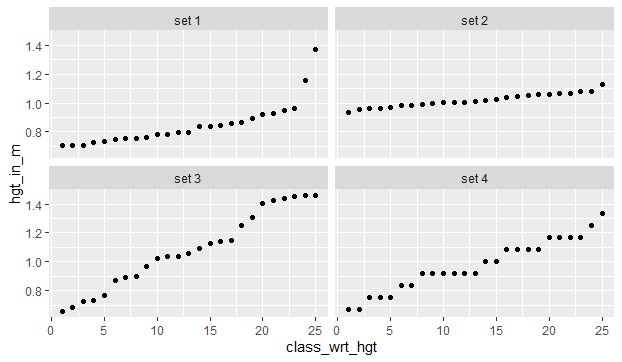 If you were building a regression model, each of these sets of height data would be interpreted differently. However, if replaced by your ordinal variable, they all look numerically equivalent. If you use this variable as a continuous variable, you are assuming a level of precision and information not present in the data.

4
Type of regression with nominal, ordinal, interval and ratio data
1
Multi-dimensional regression with ensemble models?
0
Classification/Regression Problem where Response Variable is Ordinal
2
Logistic Regression - Coefficients have p-value more than alpha(0.05)
1
Modeling strategy for predicting a day/hour based on my dataset
5
Time series forecasting dilemma. Could feature engineering overcome time dependency?
0
Applying Standardization OLS estimator
6
Regression: How to deal with positive skewness in continuous target variable
1
Is there any reason not to use classification instead of regression when looking for ranges?