Is it valid to use numpy.gradient to find slope of line as well as slope of curve at any point?

is it valid to use numpys np.gradient() to get both slopes of curve and line ? or is it meant only to find the slope of line?

Reference slope of line vs curve

Using your words, the gradient computed by numpy.gradient is the slope of a curve, using the differences of consecutive values.

However, you might like to imagine that your changes, when measured over smaller and smaller distances, become the slope (by your definitions). So when e.g. x2 - x1 almost reaches zero, you have the same meaning as $dx$.

Here is a coarse example of numpy.gradient, where $dx$ has s size of 1 (equally spaced values):

Plotting the values and the gradients - I shifted the gradients by 0.5 to the right, so their values line up with the middle of the segment for which they describe the slope: 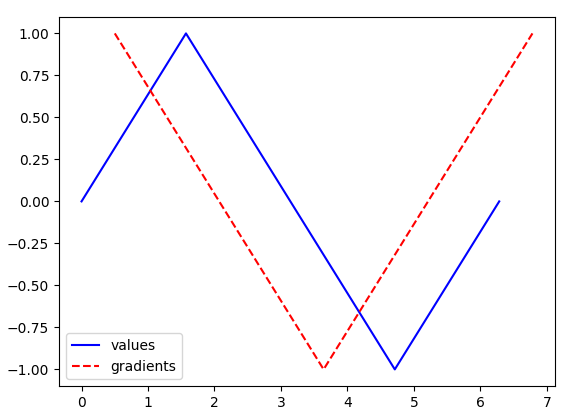 Now we do example same as before, just use one million points: N = 1_000_000. The blue line would look much more like a true sine wave, but the red line is now measuring the gradient with a much higher resolution than before, giving us the exact value at 1,000,000 points - for each tiny line segment of the blue line. 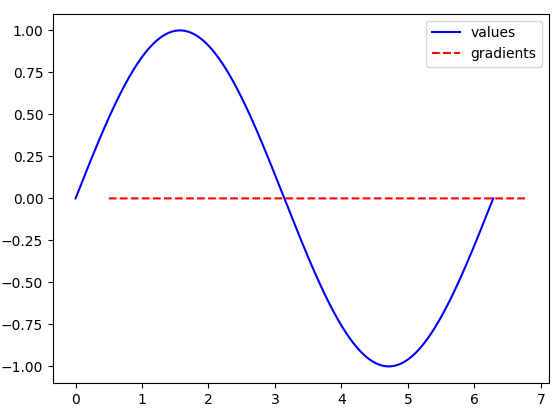 So the gradient values look like they are all zero! Well this is just because we made x2-x1 become almost zero (1 / 1e6), so the values of y2 - y1 also were essentially zero! We have started to approximate $\frac{dy}{dx}$.

Let change the axis scale to see that the gradients do still match the pattern we might expects, and are indeed very smooth - looking like a curve: 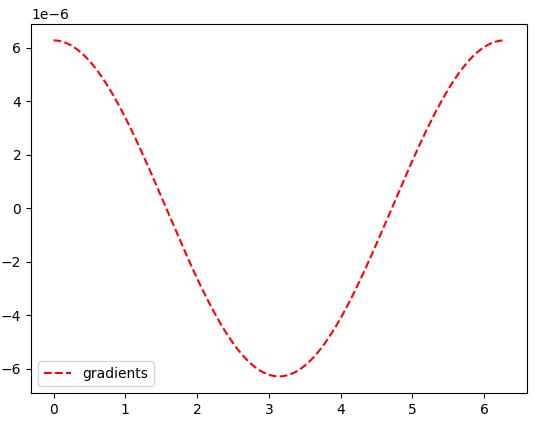 Here are a few explanations of what np.gradient really does.

Not the answer you're looking for? Browse other questions tagged python scikit-learn gradient-descent numpy derivation or ask your own question.

0
Closest Supporting Hyperplane to Points
1
Help to choose algorithm for computing difference between 2 texts?
0
Machine learning with sklearn vs. scipy stats
0
How to rotate the plot and find minimum point?
0
gradient descent in n dimensions
3
How to use sklean pipeline to deal with data that read in line by line
1
How to find slope of curve at certain points
2
SGDClassifier - Why do I need to use argmax instead of argmin to find the lowest threshold satisfying given precision?