I'm studying Andrew NG's Convolutional Neural Networks and am in Week 3 of the course which deals with object detection using YOLO algorithm . I don't understand one section in the programming assignment that uses a function called 'scale_boxes' . This is what is described about the function in the course materials.

"*There're a few ways of representing boxes, such as via their corners or via their midpoint and height/width. YOLO converts between a few such formats at different times, using the following functions (which we have provided):

boxes = scale_boxes(boxes, image_shape) YOLO's network was trained to run on 608x608 images. If you are testing this data on a different size image--for example, the car detection dataset had 720x1280 images--this step rescales the boxes so that they can be plotted on top of the original 720x1280 image.*"

And the function scale_boxes itself is defined as :

It is used in the following function 'yolo_eval' :

I don't understand the need for the function 'scale_boxes' . There doesn't seem to be any answers/attention to this in the discussion forums as well , which is why I'm posting this question here .

Can someone please explain in detail what this function does exactly and why it is required ?

YOLO's network was trained to run on 608x608 images. If you are testing this data on a different size image--for example, the car detection dataset had 720x1280 images--this step rescales the boxes so that they can be plotted on top of the original 720x1280 image.

Since you are using a pre-trained model. It will resize your image to the size it was trained on. Whether you do it or the Model does this in the background.

Bounding Box values are simple coordinates on the image. It will change with the change in the size of the image. Imagine a face on a big image and on a tiny image. 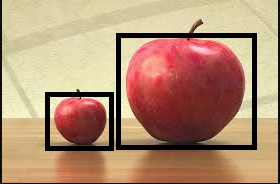 So, YOLO will return you the coordinates for a smaller image and if you draw it over your original image, it will not cover the full object. So you rescale it in the ratio of two image sizes.

You can achieve the same by resizing your original image to the size of YOLO trained image and then you need not scale your bounding Box. You can simply draw the same box on this resized image.

Not the answer you're looking for? Browse other questions tagged cnn image-classification object-detection yolo coursera or ask your own question.