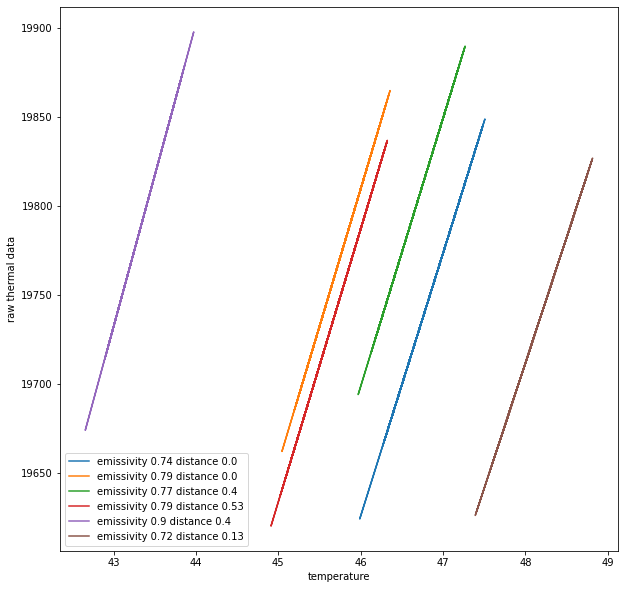 Short version: How can I find a function that maps X to Y when data looks like this.

I am working on a project which uses thermal(IR) camera. Now we extract temperature from sensor reading (raw thermal data )

For some reason I need to find a function that maps temperature data to raw thermal data. Now,

I am trying to find,

Looks like for every pair of emissivity and distance, intercept of the line is different.

Not knowing the data in detail, this look like a linear model with "dummys".

Now, when you have two distinct "groups" for which there is a "flag" in the data, you can assign a indicator variable or "dummy" (say $d$, a vector with =1 "true" or =0 otherwise). You can add this to your linear model:

$d$ introduces a separate intercept for the assigned group ($d=1$).

You can also add "interaction terms" to allow for a separate slope for group $d$ by simply multiplying $x$ and $d$.

Note that since there already is one intercept in the model (the $\beta_0$), you can only add "contrasts" to the intercept. So when you have $i$ groups for which you want to have an individual intercept, you would add $i-1$ indicators/dummys to the model. For the "reference group", the intercept will be $\beta_0$ and for the group which is identified by the "dummy" ($d$ above), the intercept would be $\beta_0 + d$.

Not the answer you're looking for? Browse other questions tagged regression linear-regression or ask your own question.

8
Fitting lines through large point clouds
1
How is y=mx+b different from hθ(x)=θ0+θ1x?
1
Is there a possibility that there is no relationship between some inputs and outputs?
3
Multiple linear regression for multi-dimensional input and output?
4
KNN Regression: Distance function and/or vector representation for datetime features
1
Mathematical bias and weight vs machine learning bias and weight
0
Regression prediction for HVAC unit Best way to utilize available data?
2
Extracting linear trends from a dataset