Help interpreting GAN output, and how to fix it?

After a few tries, I had trained a GAN to produce semi-sensible output. In this model, it almost instantly found a solution and got stuck there. The loss for both the discriminator and generator were 0.68 (I have used a BCE loss), and the accuracies for both went to around 50%. The output of the generator looked at first glance good enough to be real data, but after analysing it I could see it was still not very good.

My solution here was to increase the power of the discriminator (increased the size of it) and re-train. I hoped by making it larger it would force the generator to create better samples. I got the following output. 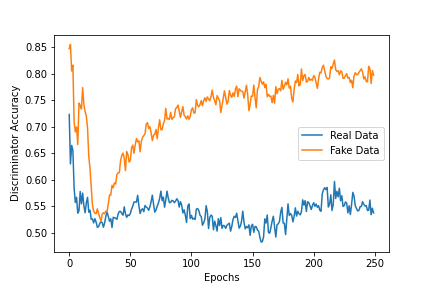 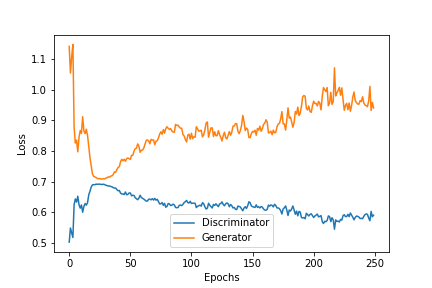 It seems that as the GAN loss increases, and is producing worse samples, the discriminator can pick it out more easily.

When I check my output from the trained generator I see it follows some basic rules the real data is following, but again under closer scrutiny, they fail more complex tests the real data would pass.

EDIT: The architecture I am using is a form of Graph GAN. The generator is just a series of linear layers. The discriminator is 3 Graph Conv Layers, then some linear layers. Slightly similar to this paper. Two potentially unconventional things I am doing:

The outputs of the GAN (once rescaled and the shape has been changed) are similar to:

An example of the truth is:

Notably, the top-left value in the matrix will always be 45.6. My Generator does not even consistently produce this.

In theory, we should first train the discriminator to optimal. However, if it becomes too good, then it will reject fake data every time, thus making the generator unable to learn. Unlike other ML task, lower GAN losses does not mean the training is converging. Newer GANs have better techniques to make training GAN easier such as Wasserstein loss, spectral normalization and progressive growing.

Not the answer you're looking for? Browse other questions tagged machine-learning neural-network training gan generative-models or ask your own question.

1
GAN - why doesn't the generator nullify the noise input?
3
How can both generator and discriminator losses decrease?
5
Why do most GAN (Generative Adversarial Network) implementations have symmetric discriminator and generator architectures?
3
DC GAN with Batch Normalization not working
5
How can my Pytorch based GAN output pure B&W with no grayscale?
1
Should Discriminator Loss increase or decrease?