How do i create a classifier on sensor data?

I am working on a indoor localization based on magnetometer.

The dataset has columns timestamp, X, Y, Z and Magnitude. Here's what all my dataset looks like: 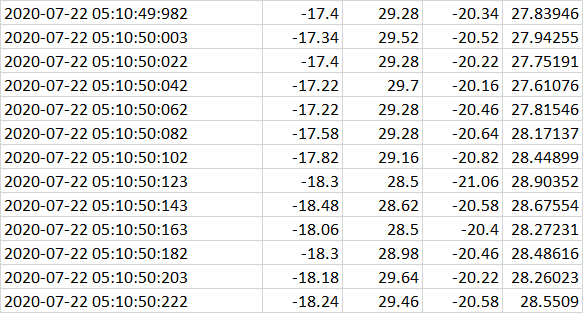 What I want to predict is coordinates. I want to build a simple classifier that predicts the coordinate/place/area based on sensor readings.

Since I don't have any labels/tags so I thought of creating one myself by simply adding a column named label. This column will be my target variable. So in coor00.csv file I will add a column label which will have details of what coordinates the sensr readings were taken from and I will do the same for other datasets. Then I will combine 9 datasets into a dataframe and then run a classifier after splitting the dataset into train and test.

There are plenty resources out there, but I just want to know how/where to start. I want to know if this is the right way.

I plan on using RandomForest classifier but I would appreciate any suggestions on what kind of classifier algorithms should be used?

By looking at your datasets, it resembles a multivariate time series problem , not sure why you are opting for Random Forest classifier ?

Not the answer you're looking for? Browse other questions tagged machine-learning classification random-forest or ask your own question.

7
How to extract features and classify alert emails coming from monitoring tools into proper category?
1
Cannot get the prediction right using Stochastic Gradient Descent: Always predicts 1
3
How do I create a data set that has a set of features for multiple options, with one option being the expected outcome?
4
How does the meta Random Forest Classifier determine the final classification?
1
Representing 2 dimensional data for facial recognition
1
Labelling a Time series dataset