Predictive models with class value belonging to a set of observations

I would like to know whether it's possible to build a predictive model where I could define a set of rows with their attributes, and a class belonging to that set of rows, instead of having the typical model one observation - one class.

What I'm trying to do is to create a model which should be able to predict the future level of a rider in professional cycling - more likely to be used to forecast young riders' level . The input data are the results of each rider (race,category of race, type of parcours, position, and so on). The class is represented with the value (from 1 to 10) each "known" rider has been assigned for each skill (mountain, flat, time trial, sprint, etc.), which means that in principle, I would make one predictive model for each skill (what means for each class). For example, for mountain class I would have the following:

I see here two main challenges, apart from the fact of dealing with both numerical and categorical attributes.

So, any idea of how to build this kind of models?

Looks like you have two problems: time-dependant predictive modeling and feature engineering.

The future Level of the Rider.

That means there is current Level. And Level in the past. And the history of Level change in time for each Rider.

The problem you are trying to solve is time dependant. Your source data can look like: 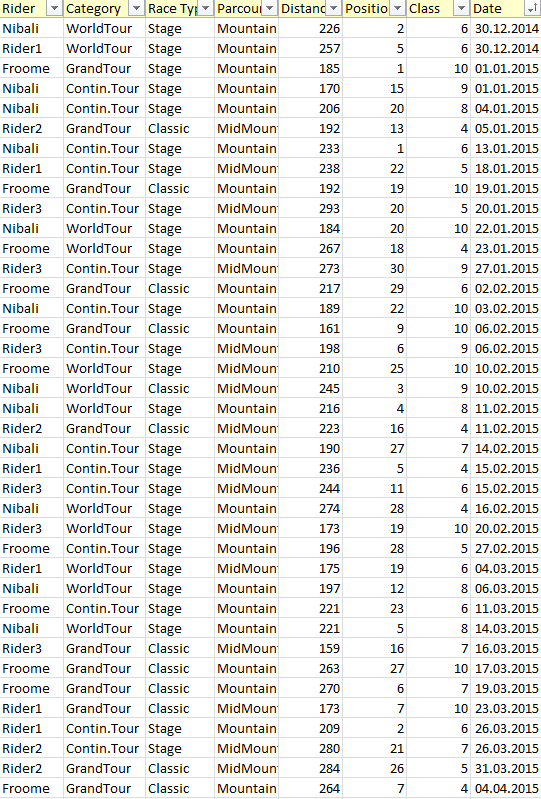 2) Build a variable to predict

Second. You should build the target feature. This Rider Level (Class).

As far as I understood:

So the only thing you realy need to predict is race result. 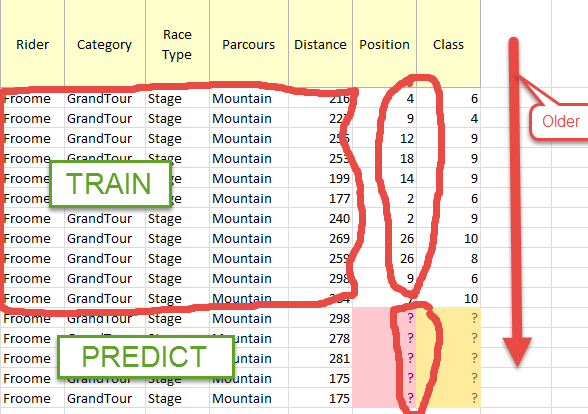 Not the answer you're looking for? Browse other questions tagged classification predictive-modeling regression feature-selection feature-construction or ask your own question.

4
Combining Linear Regression and Time Series
1
Predicting a numerical value based on past values and categorical attributes
1
Potential problems with expanding training set
1
Improving classifcation when some are less represented?
1
How to approach data prediction problem
2
When developing machine learning models, is the size of each class in the test set important?
1
Predict the first observations of a time series when order of the model is higher
2
Training is not stable with extreme class imbalance
0
How to interprete the feature significance and the evaluation metrics in classification predictive model?