Unblock your team by capturing collective knowledge that anyone can find.

“If there is one thing developers like less than writing documentation, it’s responding to unnecessary escalations […] and too many escalations wear down the developers.”

“We needed a better place to store all the questions and answers that people were repeatedly asking, and we discovered Stack Overflow for Teams.”

“We use Stack Overflow for Teams internally when onboarding new developers, and when new developers ask questions, everyone can benefit from the shared knowledge.”

How to use “tree boosting” with a data-driven loss function

We have a problem which has a data-driven (non-analytical) loss function. Our target contains whole numbers between 0 and 20 (the target is inherently discrete), although larger values are possible, just not present in our dataset. The fact that we have a very precise loss function leaves us with some serious issues when using algorithms like XGBoost:

The loss function is generally non-convex. It's not easily fitted by a convex function since its shape is data-driven and can vary drastically. For example, this means that a large punishment is inevitably given for predictions further from the part of the function that is well-fitted, where no large punishment is required. If we interpolate instead of fit, the hessian can be negative (see attached picture), which is a problem for determining leaf weights (right?). 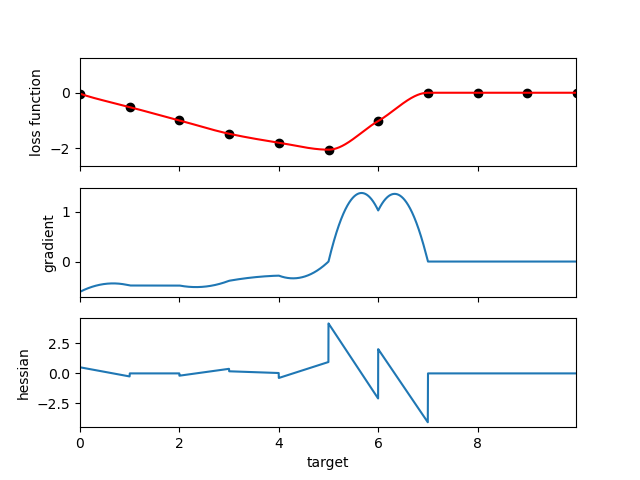 We think we can adapt something like the XGBoost algorithm (I use this algorithm as an example because I'm both familiar with the paper and the API) by swapping out its dependance on the gradient en hessian with a brute-force method for finding the optimal leaf weights and best gain. However, this will slow down the algorithm massively, perhaps cripplingly so.

My questions are: is the some default way of dealing with complex loss-functions within existing algorithms? Is the an algorithm that is suited for dealing with these problems? Is there anything else you could suggest to solve the above issues?

First some prior and known aclarations (that you probably already know).

Metric is what we want to optimize.

Optimization Loss is what the model optimizes.

Obviously, we would like the Metric and the optimization loss to be the same, but this is always not possible. How to deal with this?

The last one almost always works.

In general for complex algorithms Neural Networks tend to work better due to the flexibility of the loss functions (more than in normal ML).

With XGBoost you can come up with your own loss and metric. It is relatively simple to just add a custom loss. However, I have no experiance with problems described by you, so you would need to see if what you have in mind will fit into the standard XGB.

Not the answer you're looking for? Browse other questions tagged machine-learning random-forest decision-trees xgboost loss-function or ask your own question.