Suppose I have a perceptron with one-hidden layer, with the input - one real number $x \in \mathbb{R}$, and the activation function of the output layers - threshold functions: $$ \theta(x) = \begin{cases} 0, x \leq 0 \\ 1, x > 0 \end{cases} $$ The hidden layer may contain $k$ units and I would like to calculate the VC dimension of this feed-forward neural network. The VC dimension is defined as a cardinality of the maximal set, that can be shattered by properly adjusting the weights of the neural network. 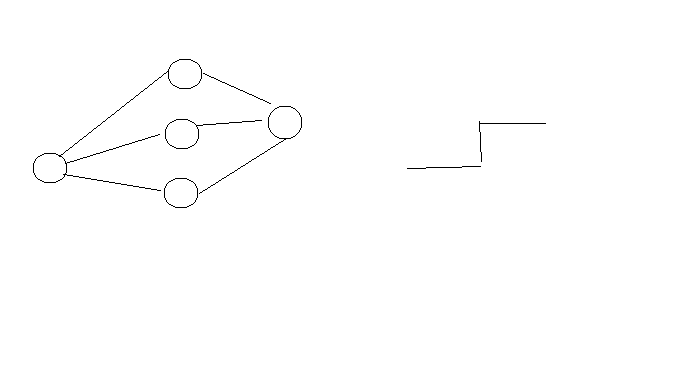 The threshold functions have a VC dimension of $n+1$, where $n$ is a number of input neurons, because by a plane $n-1$ plane one may split $n$ points in any way. So when considering the results in the first layer, we have a VC dimension of $2$ for each gate, and the total number of points, that can be separated by the activation is $2 k$. Then we have a vector $\in \mathbb{R}^k$ to be processed to output, and the output unit has a dimension $k + 1$.

I do not believe this is correct. The entire network will represent a piecewise-constant function with at most $k+1$ pieces, and has VC dimension $k+1$.