Was this dataset analysed correctly? [closed]

Ask Question
Asked 5 months ago
Active 5 months ago
Viewed 171 times
4
$\begingroup$
Closed. This question is opinion-based. It is not currently accepting answers.

There's a Twitter thread going around that claims there are signs of voter fraud due to anomalies in the election vote count data set. You can download the dataset here and find the script to generate the analysis here.

Was the dataset analysed correctly? If yes, are these 'anomalies' significant enough to indicate fraud? If no, in what way is the analysis lacking?

PS: I'm not looking to start a political discussion, or to make any claims of fraud myself.

While the data comes from the NYTimes and seems legit, the presentation is intentionally misleading and the subsequent assertions are baseless. I say "intentionally" because an unbiased and reputable analysis would not propagate such major allegations from the data they have presented. The data does not prove nor disprove voter fraud, so the unfounded assertions are simply disinformation.

Before diving into the data

We are going to see many more such threads/posts in the coming months and years, so I need to address this bit before delving into the question.

Consider the following whenever you view anything online:

He/she first establishes the fact that, in total, batches of votes do not conspicuously favor one candidate or another (they do so via the tweets below). The distribution of the D/R ratio in vote batches over time is not reflected in this aggregate plot. However, this could mislead viewers to believe that they should expect 50/50 Democrat/Republican consistency throughout the vote counting process, which cannot be assumed from this information. The "anonymous data scientist" seems to encourage this logical fallacy by using this as his/her premise and posting his/her follow-up tweet to the plot (image below). 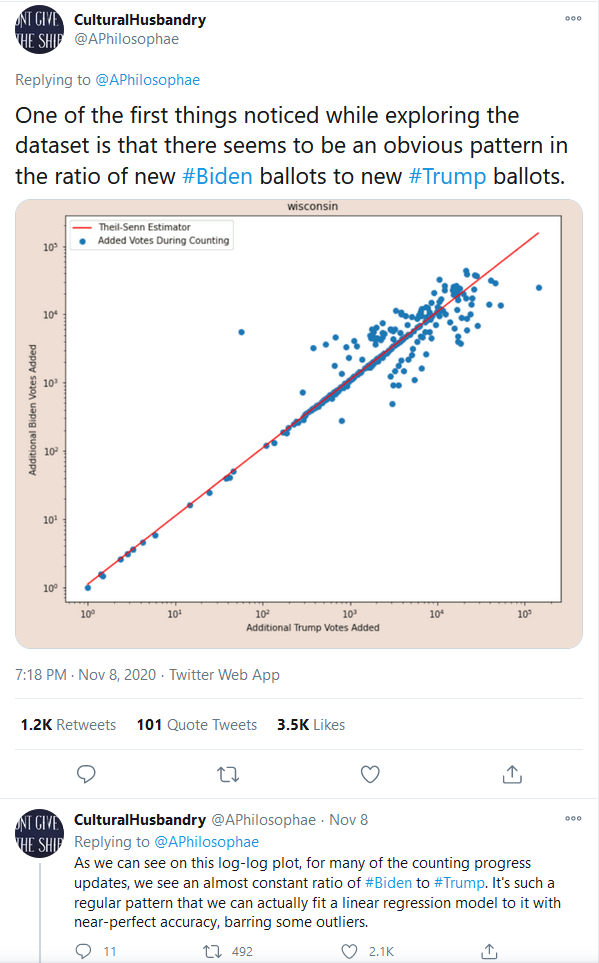 He/she then establishes that the initial counts are "random" and noisy as one might expect from a 50/50 split. However, these batches do not have associated sizes with them! A "batch" may be 100K votes or it could fewer than 10. An actually informative portrayal of the data would have made the size of the circle/point reflect the size of the batch (bubble chart) rather than a scatter plot. Although this plot may technically be accurate, this can still be quite misleading, particularly because the "anonymous data scientist" made no note of this deficiency (lack of batch size information). But for the sake of argument, let's go with it. 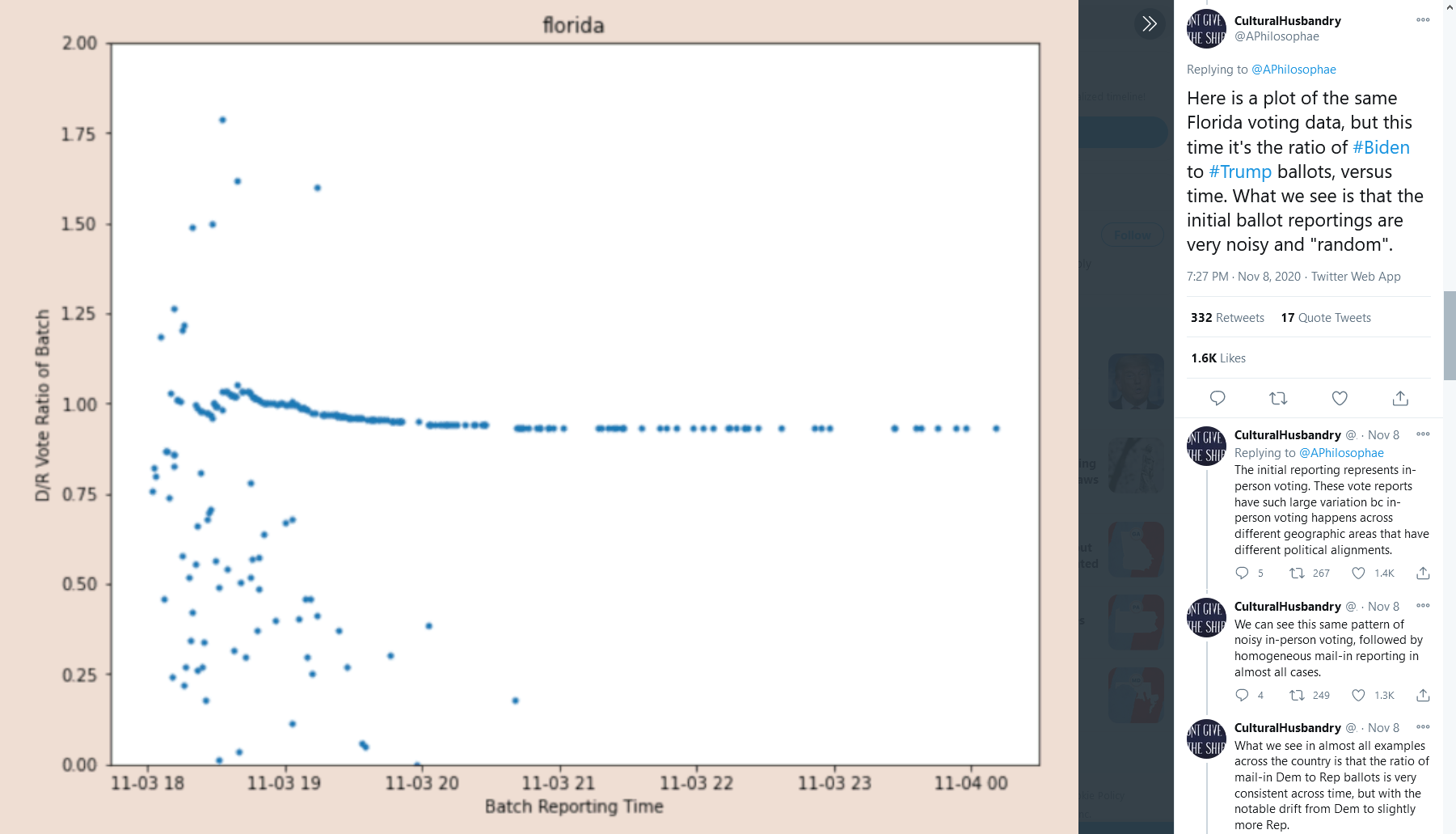 Now they start talking about an "anomaly" and introducing conspiratorial allegations. They note the jump toward D, given the D/R ratio per batch in Milwaukee at some point in time. There are many legitimate explanations for this.

For example, a high/dense population such as a city (likely Democrat-leaning) would of course take more time to collect/count ballots, so they may not have started their reporting until after low/sparse populations (likely Republican-leaning). This can cause a sudden jump in favor of Democrats.

Also, the majority of the early ballots are in favor of Republican. This is to be expected; of course the candidate who consistently attempted to delegitimize mail-in ballots would receive fewer mail-in ballots from his followers. By contrast, Democrats were encouraged to vote by mail (and they did), making the later mail-in vote counts lean Democrat. This is another factor that could explain why the initial vote counts are skewed toward Republican in most states when compared to the final counts. 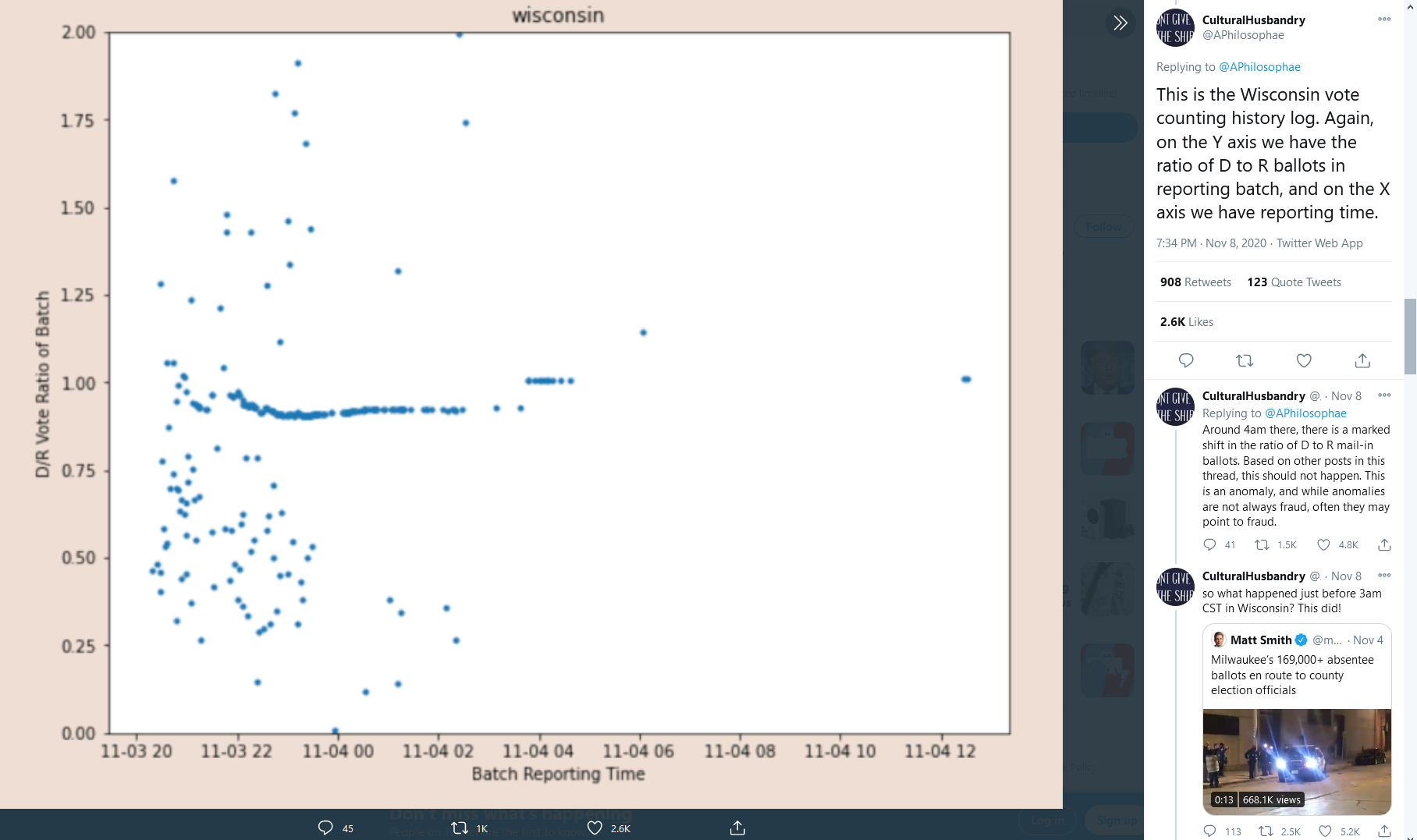 I read the thread but didn't analyze the data.

It's very difficult to answer this question in any conclusive way: assuming the graphs are correct, interpreting them is a highly risky/subjective game because there's so many hidden factors: the way votes are collected at different times, in different places which have different population density, under different state laws and procedures...

I would simply emphasize that in statistics the word "anomaly" only describes data points which deviate from the norm (regular pattern). Note that this is a quite vague notion (how far from the norm is an anomaly?), and more importantly that statistical analysis by itself does not explain the reason why anomalies happen, it can only detect them. The explanation must rely on what is usually called "expert knowledge", i.e. indications which are not present in the data itself, obtained by human analysis of how the data was obtained.

The linked analysis is quite interpretative and possibly biased:

My point is: there's no way to know if this analysis is correct just from the data, most of the author's conclusion are based on external explanations.

Not the answer you're looking for? Browse other questions tagged time-series regression dataset statistics visualization or ask your own question.

3
Extrapolating GLM coefficients for year a product was sold into future years?
1
How to determine if a company decision was successful or not?
0
Does this correlation make sense?
2
How this visualisation was made?
1
What dataset was Stanford NER trained on?
1
When is z-normalization not needed when using DTW?
0
How to normalize the data correctly in spam dataset