I am researching Yolo detector, and have read the original paper, but still have some confusion and a few questions regarding the assignment of bounding box predictors to ground truth at training time (in particular calculating the confidence).

Some resources like Andrew Ngs deep.ai here set the confidence of the corresponding label vector bounding box confidence to "1" if there is an object present at that grid cell. In contrast, here is an article from Oracles engineers that set the confidence to maximum Intersection-over-union value between some object and all bounding box predictors. I think the latter is also in line with what the paper is trying to tell us:

"YOLO predicts multiple bounding boxes per grid cell. At training time we only want one bounding box predictor to be responsible for each object. We assign one predictor to be “responsible” for predicting an object based on which prediction has the highest current IOU with the ground truth" (You Only Look Once: Unified, Real-Time Object Detection; Redmon, Divvala, Girshick, Farhadi) 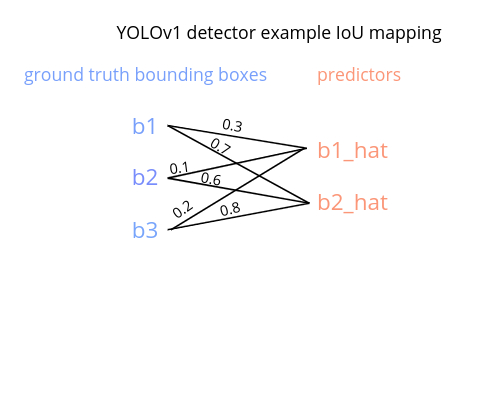 Some resources like Andrew Ngs deep.ai here set the confidence of the corresponding label vector bounding box confidence to "1" if there is an object present at that grid cell.

This is because prof. Ng is refering to true probability of an object being in a specific cell ($P(\text{object})$ value), and not the confidence score ($P(\text{Object}) \times\text{IOU}$ value). Thereby, we have two possible situations: $$ P(\text{object}) = \begin{cases} 1 \text{ if an object is present in the cell}\\ 0 \text{ otherwise} \end{cases} $$

However, this is not what YOLO is proposing to have as ground-truth value of confidence. Citing the paper:

Thereby, the value of confidence that the network is trying to predict (the confidence ground-truth label) is given by: $$ P(\text{Object}) \times\text{IOU} = \begin{cases} \text{IOU if an object is present in the cell}\\ 0 \text{ otherwise} \end{cases} $$

Because of this, the other source mentioned in the question (Oracle's article) is the correct one.

The paper states we should assing a b.b. predictor to a ground truth object, but once we have done so, that bounding box predictor is "taken" and married to that object, so it can't be assigned to any other object in that grid cell?

Concretely, what's said by the authors is the following:

Given what's said in the article, during training if a predicted bounding box has the highest intersection over union with two different objects, then the loss function will be related to both ground-truth bounding boxes.

For example, if we have a look at the part of the loss function related to the prediction of the center of the bounding box $(\hat{x}_i, \hat{y}_i)$:

As we see, we will be computing this part of the loss using both ground-truth bounding boxes. This makes sense if the objects that are being detected have similar sizes/ aspect ratios and are close to each other (they fall on the same grid cell).

Note: Delving into this question I realized that the previous arguments are just a interpretation of what the algorithm would do in this specific situation. I think that another plausible methodology to follow on this situation would be to just use the ground-truth object with the highest $\text{IOU}$.

Not the answer you're looking for? Browse other questions tagged deep-learning yolo or ask your own question.