I see this example ON NN notes:

how this solution is achieved? is there any clear trick or usual step for solving this question quickly?I think the solution in the question be wrong. no idea anyway... please be aware that this is PhD entrance exam question and we should think the information is not enough in the question.

some idea tell us that 5, 5 is answer because for NN there is no difference on condition (1) and (2) in the question.

some idea tell us there is 3, 3 solution, but with complex neurons (this is not should used here in general, because this is general question even with lack of information)

some idea tell us there is at least 5, 5 solution because we cannot model with 3 nodes here... (not for first reason)

here one implementation of these structure in MATLAB for each case with 3 or 5 nodes and I think with $5$ we get the better result. 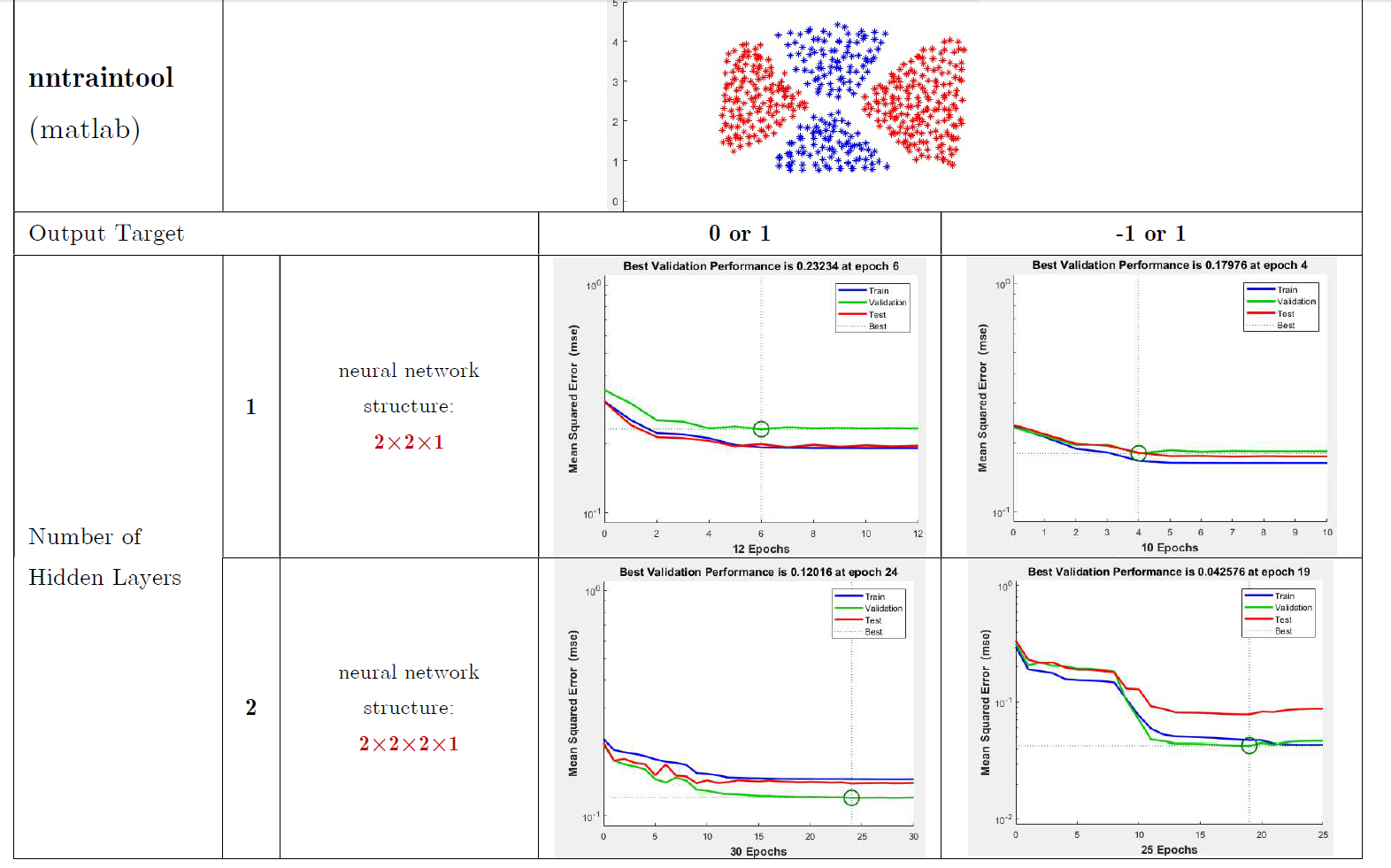 I believe the solutions should be a total of 3 neurons for each question. This is because two neurons are sufficient to calculate the lines that separate all the points. Then, an extra neuron can be used to decide to which class does a point belong to. Let's see why:

First, we should note that both classes are separable if we use two lines: 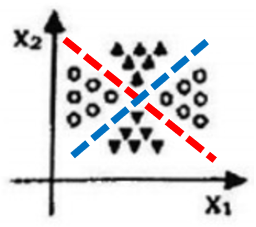 If a point $(x_1,x_2)$ doesn't belong to these red or blue lines (like all the points in the picture), then the above equalities would not hold. 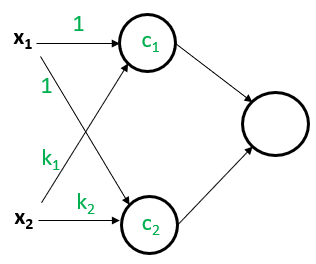 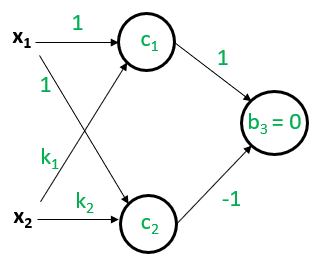 Edit regarding the comments

The above explanation respects the constraints given by the question (neuron outputs $\in\{0,1\}$ or $\in\{-1,1\}$), but it also assumes that we are able to choose freely how is the activation function w.r.t. its inputs.

Below in the comments we have talked about using simpler activation functions, concretely perceptrons, which have the next behaviour: $$ \text{output} = \begin{cases} 1 \text{ if } \mathbf{w\cdot x}+ b > 0\\ 0 \text{ otherwise} \end{cases}$$

Perceptrons have already been considered above in the answer for the first two neurons, which are able to transform our initial data to XOR data.

Given this, it's important to note that 3 perceptrons are enough to model any logical function (as argued in posts like this one from Medium). This means that with the above reasoning we would need 3 more neurons, making a total of 5 neurons needed.

This question is similar to this one and this one, but seems to be ill-posed. Either because it implies an unknown (undefined) way how the neurons process the inputs, or because the provided solution (5, 3) is wrong.

Concretely, usual neurons only sum their inputs and the bias and pass the sum through a step function. These are the typical neurons used in practice, so, without further information, educated reader would simply assume such neurons by default. Under this assumption, we need 5 neurons, no matter whether the step function produces {0, 1} or {-1, 1} as the output. See the left part of the figure below. 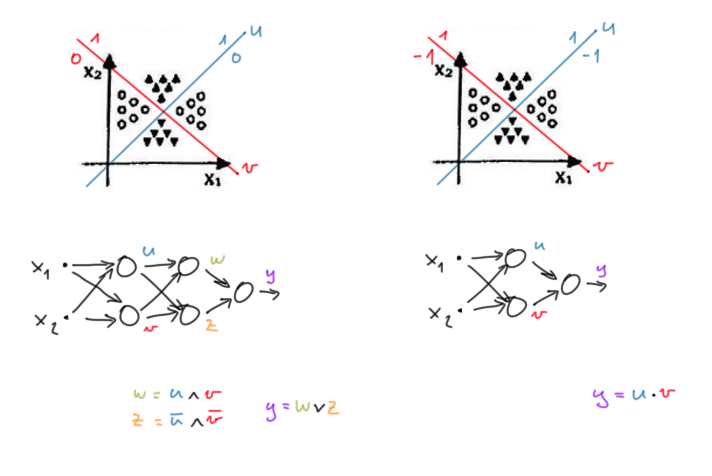 However, if the neurons are allowed to multiply their inputs (something highly unusual in practice, but theoretically possible), then we can achieve the classification using only three neurons (right part of the figure above). The first layer again defines two linear boundaries, but now the output is +1 if a point is on one side of the boundary and -1 on the other. So, the black triangles above the two boundaries have $(u, v) = (+1, +1)$, while those below the both boundaries have $(u, v) = (-1, -1)$. In the second (last!) layer, we simply multiply the two: $y = u \cdot v$. $y$ is one for the triangles, and -1 otherwise.

If this was an exam question, I consider it highly unfair, because it requires highly unusual neurons and there is no hint to that. Actually, if you develop this idea further, you can come up with just a single neuron, one which combines the functionality of the three neurons in the right figure. There is nothing in the question suggesting that neurons cannot do that...

Not the answer you're looking for? Browse other questions tagged machine-learning python neural-network classification r or ask your own question.