Result of uniform weight initialization in all neurons

cs231n has the question regarding how to initialize weights. 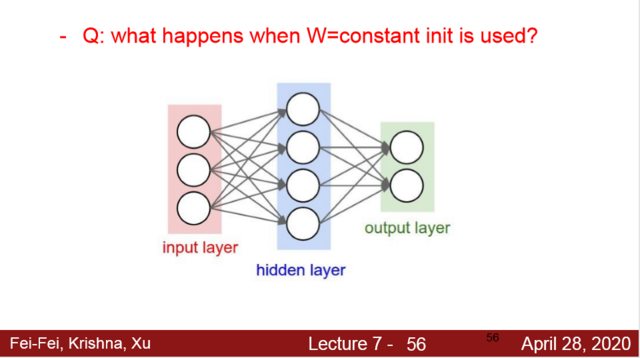 Please confirm or correct my understandings. I think the weight value will be the same in all the neurons with ReLU activation.

When the weight is the same, o/p will be the same for all the Neurons in every Layer. 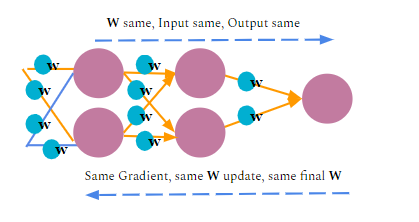 Hence, during backpropagation, all the Neurons in a particular layer will get the same Gradient portion. So, the weight will change by the same amount.

But, the very first layer (connected to input Features) will work normally as its input is the actual Features itself which is different always.

I'll make this as explicit and non handwavy as possible, at the risk of being boring.

Let us take a small toy example: a network with two inputs $x_1$ and $x_2$, two hidden layers with two units each and one output. For simplicity, we will assume that the activation function is the identity function (i.e. no activation) and that the objective function is the output itself (not very realistic, but for our purposes this could mean our cost function is meant to drive the output to the zero function).

Below are the outputs of each unit expressed as a function of their inputs.

As can be seen, the initial value of both $w_9$ and $w_{10}$ is the same and their updates are the same too. On the first iteration, they will have changed after the update, but they will still be equal to each other. Not necessarily a bad thing, but if they're equal, you might just as well keep only one of them in memory. If you're keeping both, they should be different.

Generalizing this toy example, we can state that if we initialize all weights to the same value $a$, the weights of a layer will all be equal forever, except for the first layer, which keeps a semblance of normalcy. In other words, using only one weight per layer is enough.

A special case of initializing all weights to the same value is initializing them all to 0. If we look once more at the partial derivatives (which we use to update our weights), we can see that they will all be zero, always! In this case, the weights never get updated at all, so our model becomes entirely useless.

A very pretty visualization for the effects of different basic weight initialization techniques can be viewed here.

Not the answer you're looking for? Browse other questions tagged neural-network weight-initialization or ask your own question.

7
What is the purpose of multiple neurons in a hidden layer?
12
How to check for dead relu neurons
10
CNN - How does backpropagation with weight-sharing work exactly?
3
How sensitive are feedforward Neural Network to weight changes?
1
Should weight distribution change more when fine-tuning transformers-based classifier?
1
Remove unnecessary Neurons from a Neural Network regarding a particular output
2
Loss function for ReLu, ELU, SELU