Optimal selection of k in K-NN

I am currently reviewing some concepts related to Machine Learning, and I started to wonder about the hyperparameter selection of K-NN classifier.

Suppose you need to solve a classification task with a number of classes equal to M: I was thinking that the best choice for the parameter K of our classifier should be for K > M.

In this way, we are avoiding all the pathological cases in which a sample may be in the middle of all the M classes and then have a tie. For instance, consider the following example in which we have M=3 and each geometrical shape represents a class: 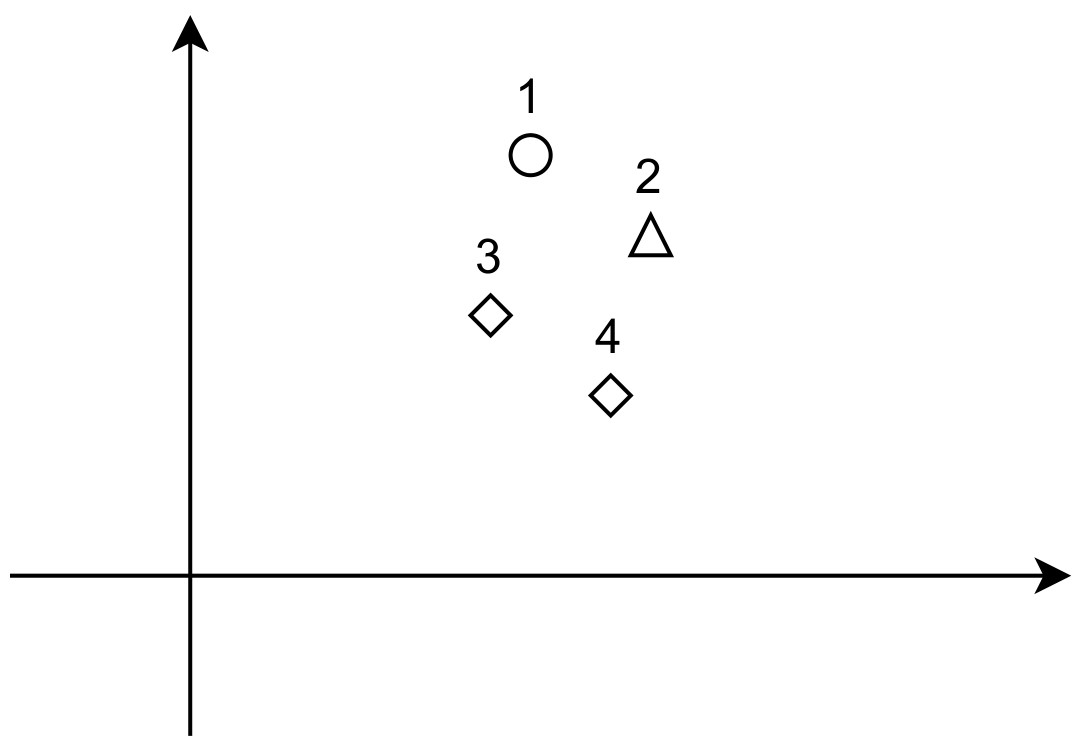 Clearly this is just a toy example, but I think it is sufficient to illustrate my thoughts. I have tried to look for an answer but I wasn't able to find any resource mentioning this, am I wrong in some way or this reasoning may be sound?

Your idea isn't wrong, however in k-NN there always might be a case where you have the same number of votes for 2 or more classes (e.g. you have $k=6$ and you have 3 samples of one class vs 3 of another). With your solution you are just overcoming one very small case of ties and the $k$ that you choose might not be the optimal $k$ for classification, which is your primary objective (i.e. you might hurt your classification performance with a sub-optimal $k$ so that you don't get one type of ties).

Since you already have such a condition, you could also handle your situation, without selecting a sub-optimal $k$.

As I was playing with this problem, Djib just wrote an answer which is certainly better than whatever I could have come up with. To illustrate Djib's point, here is a small demonstration that as soon as there are more than 2 classes there's no value of $k$ which guarantees the absence of tie (except if $k=1$ of course).

To add a couple of references, to the already good answers, on the problem of selecting the optimum $k$ for $k-NN$.

Then how to select the optimal K value?

The best choice of k depends upon the data; generally, larger values of k reduces effect of the noise on the classification, but make boundaries between classes less distinct. A good k can be selected by various heuristic techniques (see hyperparameter optimization). The special case where the class is predicted to be the class of the closest training sample (i.e. when k = 1) is called the nearest neighbor algorithm.

The accuracy of the k-NN algorithm can be severely degraded by the presence of noisy or irrelevant features, or if the feature scales are not consistent with their importance. Much research effort has been put into selecting or scaling features to improve classification. A particularly popular[citation needed] approach is the use of evolutionary algorithms to optimize feature scaling. Another popular approach is to scale features by the mutual information of the training data with the training classes.

In binary (two class) classification problems, it is helpful to choose k to be an odd number as this avoids tied votes. One popular way of choosing the empirically optimal k in this setting is via bootstrap method.

Not the answer you're looking for? Browse other questions tagged machine-learning hyperparameter-tuning k-nn or ask your own question.

2
Reasons and prevention of trivial (and less trivial) misclassification errors?
1
Is cross-entropy a good cost function if I'm interested in the probabilities of a sample belonging to a certain class?
2
Highly Imbalanced dataset fro classes more than 200
0
How can I improve the results of my clustering
3
Which model is better for incremental learning?
1
Comparing multi-class vs. binary classifiers in predicting a single class