What is the more natural parsing, the one that leads to the preferred reading of the sentence

I have those rules:

and those two possible parse trees: 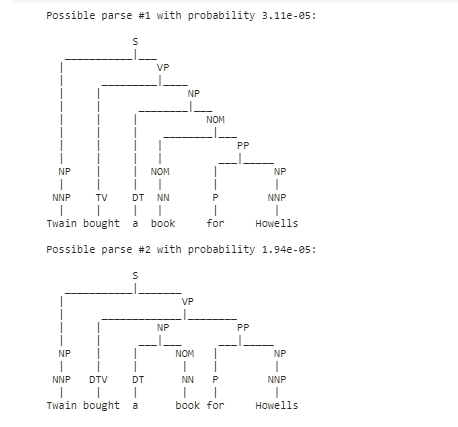 I am asked for the next question:

What is the more natural parsing, the one that leads to the preferred reading of the sentence?

Can anyone explain to me, what is more natural in English and why ?

Can anyone explain to me, what is more natural in English and why ?

This is a classic example of PP-attachment ambiguity (PP = prepositional phrase). For a full overview of the problem and some traditional approaches, check out this paper. Here I'll cover the basics.

whereas the second analysis means

The second one is probably the most natural interpretation: somebody (Twain) buys something (a book) for somebody else (Howells). So, in this case, the subject may be just buying a gift for somebody else.

On the other hand, in the first sentence, somebody (Twain again) buys something (a book again as well) but now that something was intended for somebody else (a book for Howells) yet the buyer is keeping it for himself.

The explanation is that, when parsing this sentence, the for-prepositional phrase is consumed when it is attached to the closest noun (book). Therefore, it's no longer available later to become the for-phrase beneficiary argument of the verb buy, which therefore can no longer have its gift-making meaning and switches instead to its purely transactional transfer-of-ownership meaning.

The branching of the trees represents these two interpretations, that is, the different syntactic ways in which the same linear order of constituents can be arranged. This phenomenon is one of the traditional examples that linguistic structures do not map exactly to the observable temporal sequences we perceive.

The interesting thing in your example is that the "less typical" interpretation (the first one, corresponding to the "not-a-gift" meaning) is being assigned a higher probability, while I would expect it to be much less likely, since the probability of the "gift" meaning should be much higher when the for-phrase has a person name as the head (Howells) –people just don't go around buying books that belong to other people, but rather for them.

Not the answer you're looking for? Browse other questions tagged nlp nltk stanford-nlp or ask your own question.

3
What is the best practice to classify category of named entity in sentence
4
What is the best way to split a sentence for a keyword extraction task?
1
What is a lower bound on the vocabulary size for generating word/sentence embedding using word2vec or skip thought vectors?
0
What is this called by gathering the meaning from a sentence?
2
What is the advantage of positional encoding over one hot encoding in a transformer model?
0
Constituency vs Dependency Parsing: What is more effective for Sentiment Analysis?
2
"Change the features of a CNN into a grid to fed into RNN Encoder?" What is meant by that?