Elimination of features based on high covariance without affecting performance?

I ran into a question where the answer ran me into a big doubt.

Also, suppose that the covariance matrix between these three random variables are as follows:

When $|d| \gg 0$, someone may ignore either of the two features, without losing any performance.

The claim was marked as a true question. Is there any idea why the mentioned proposition is True and performance was not affected?

$|d| \gg 0$ means there is a very strong correlation between $x_1$ and $x_2$. This means one can be expressed (almost completely) in terms of the other, thus one of two is almost redundant.

Now consider that $x_2$ is simply a shifted version of $x_1$, ie $x_2=c_0+x_1$. Does it now offer any new information apart from what $x_1$ provides? Again no, by simply changing the reference point $c_0$, which is equivalent to changing the baseline of the measuring system, does not by itself offer new information.

Thirdly consider that $x_2$ is a re-scaled version of $x_1$, ie $x_2 = s \cdot x_1$. Does it offer now different information than what $x_1$ provides? Again, no since scaling is equivalent to changing the measuring unit of $x_1$, but this is simply a re-naming of units, no new information is added.

One can see that any transformation of the form $x_2 = c_0 + s \cdot x_1$ does not offer any new information from what $x_1$ already provides, by the arguments above.

If one wants to be more realistic one can add some noise, ie $x_2 = c_0 + s \cdot x_1 + \epsilon$, where $\epsilon$ is some random variable with zero mean and very small variance.

So if such a high correlation exists between variables/features, one of them can be always eliminated without diminishing performance as being redundant (in the sense that, as far as second-order statistics are concerned, the two variables are identical).

This is one of the main rationales of feature selection and dimensionality reduction in machine learning.

I primarily agree with @NikosM., but take issue with the question's assertion (my emphasis)

without losing any performance

Having very high correlation means they are very nearly in a linear relationship, but it is possible that the deviation from linearity is not random, and in fact is predictive. Here's a simple example: 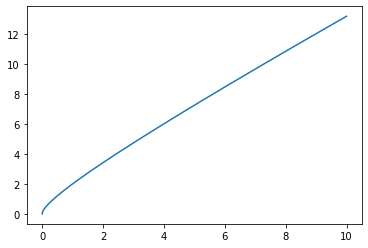 Not the answer you're looking for? Browse other questions tagged machine-learning feature-selection dimensionality-reduction variance or ask your own question.

11
Which supervised learning algorithms are available for matching?
8
Why doesn't overfitting devastate neural networks for MNIST classification?
2
Best way to determine the number of features for RFE (recursive feature elimination)
2
Multiclass classification with high number of classes, high number of features and small sample size
2
Doubt in Derivation of Backpropagation
1
Is there any problem with dropping only part of the OneHot generated features?
1
Is Recursive Feature Elimination finding best features subset?