I believe its wrong to use Pearson correlation coefficient for the above scenarios because Pearson only works for 2 continuous variables.

Please answer the below questions

Checking if two categorical variables are independent can be done with Chi-Squared test of independence.

This is a typical Chi-Square test: if we assume that two variables are independent, then the values of the contingency table for these variables should be distributed uniformly. And then we check how far away from uniform the actual values are.

Suppose we have two variables

We observed the following data:

Are gender and city independent? Let's perform a Chi-Squred test. Null hypothesis: they are independent, Alternative hypothesis is that they are correlated in some way.

Under the Null hypothesis, we assume uniform distribution. So our expected values are the following

So we run the chi-squared test and the resulting p-value here can be seen as a measure of correlation between these two variables.

To compute Crammer's V we first find the normalizing factor chi-squared-max which is typically the size of the sample, divide the chi-square by it and take a square root

Here the p value is 0.08 - quite small, but still not enough to reject the hypothesis of independence. So we can say that the "correlation" here is 0.08

And get 0.14 (the smaller v, the lower the correlation)

For this, it would give the following 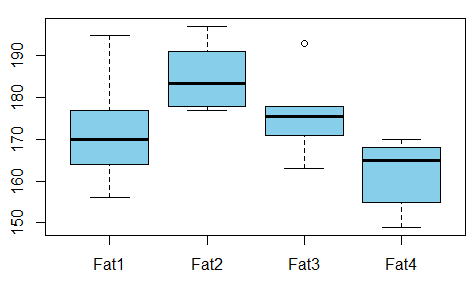 Is there any dependence between the variables? For that we conduct ANOVA test and see that the p-value is just 0.007 - there's no correlation between these variables.

So we can take the p-value as the measure of correlation here as well.

Not the answer you're looking for? Browse other questions tagged r statistics correlation or ask your own question.