I have a dataset with 11 features, I noticed that manipulating these features (eg dropping one or some of them) doesn't affect the error scores of training and testing data, so I had to check the importance of these features. Here's the following: 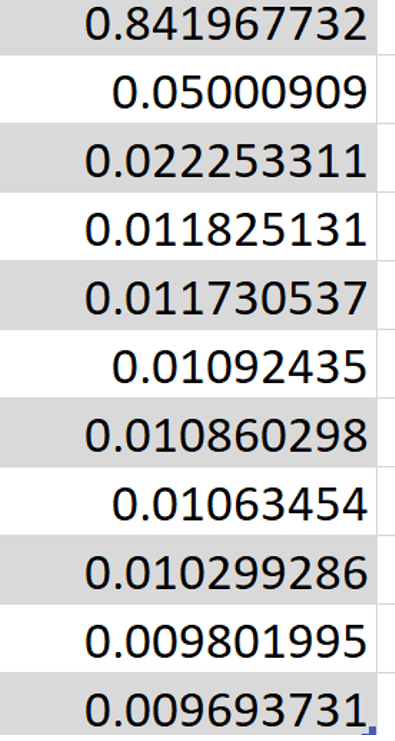 As noticed the first feature has a very high contirbution. However, the rest have insignificant importance. Thus I tried to run the model using only the first feature. It was expected that the results scores will not decrease significantly as the rest 10 dropped features have very low feature importance. However, after running the experiment with only the first feature, the abs error percentage of the testing data increased significantly from 14.13010% to 22.96036%. why is this happeneing? I expected that the error will be almost near to the base testing results as I train using the feature which dominates the feature importance?

Also, some of these features are correlated (no more than .62 correlation), is this the reason why the scores can't be so reliable? if so, what mertic can I use to test the feature importance for correlated features

I can´t give you an perfect answer because there is no code, dataset and the target what you want to achieve.

But I made a similar experience and solved this on another way.

With these 4 options, I got a better view into my dataset. Hope I could help you a bit.

Not the answer you're looking for? Browse other questions tagged regression random-forest feature-engineering or ask your own question.

10
Is this a good practice of feature engineering?
2
Large negative R2 or accuracy scores for random forest with GridSearchCV but not train_test_split
0
Feature Engineering - correlation with binary outcome - Titanic Dataset - Ticket feature
1
Dropping one category for regularized linear models
1
Lasso regression not getting better without random features