How Does EAST detector implementation with VGG16 look? How many outputs does it have?

I was reading the Efficient and Accurate Scene Text Detector paper and saw the author reference VGG-16 as a possible stem "feature extractor" network. In the paper they say:

In our experiments, we also adopted the well-known VGG16 model, where the feature maps after pooling-2 and pooling 5 are extracted.

I'am trying to re-implement this paper on my own using VGG16, and was wondering if anyone knows(or can infer) how the VGG16 implementation would look like. The author provides this diagram representing how it was done with PVANet: 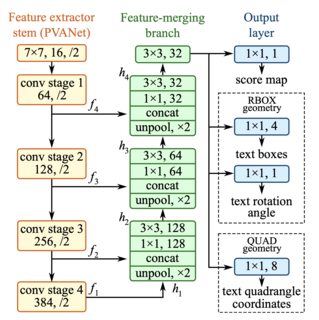 Each block takes the input from the previous hi. Does unpooling on it, concatenation with the corresponding feature extractor layer output map and a 1x1 followed by 3x3 convolution (as shown in the diagram).

This works out nicely because each block will double the sizes of the feature map while also halving the channels of it; this will pass the data along until there are 32 channels! And the author has chosen pvanet layers whose output feature map sizes increase by a factor of 2x:

(sorry about the image size, you wouldnt be able to read the numbers otherwise. I selected an input image size divisible by 32 for demonstration)

So my questions are:

I've seen this: https://github.com/SakuraRiven/EAST, however this implementation is using 3 concatenations.

9
How does a convolutional ply differ from an ordinary convolutional network?
8
Faster-RCNN how anchor work with slider in RPN layer?
3
How to calculate $\phi_{i,j}$ in VGG19 network?
2
1x1 convolutions, equivalence with fully connected layer
3
How to combine different models in Keras?
3
Troubles Training a Faster R-CNN RPN using a Resnet 101 backbone in Pytorch