Modelling population changes with years on a network graph

Network graphs, or visualisations look somewhat like this, with each node representing a thing connected to another thing. So for my example, I'd like to model population changes for refugees from their origin country to their destination country.

I've been tasked to create a graph which shows a similar change over a period of years, but I am really not sure how years could be modelled? e.g. how would a graph like the example above, show a change in years?

The Sankey diagram would be nicely suited for your problem statement.

If you want to model the graph on a geographical map, it can look something like this: 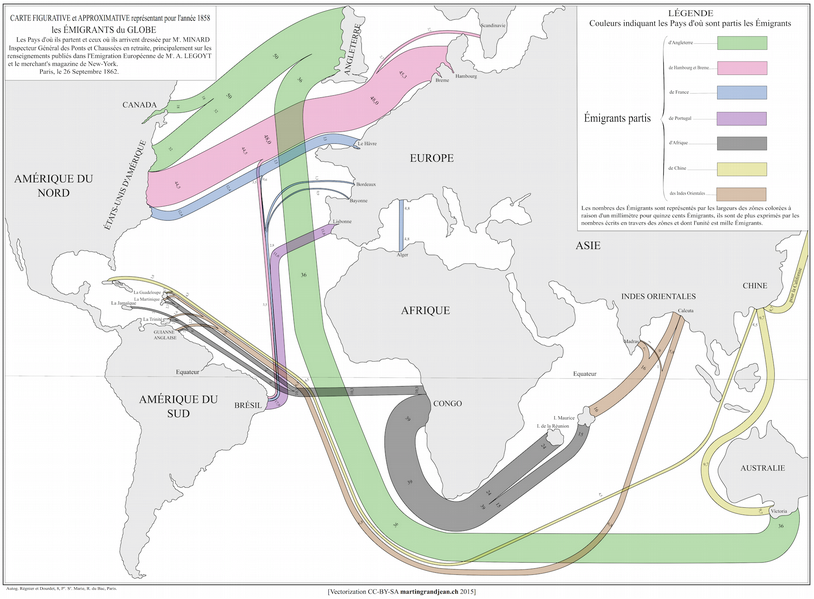 I am not sure whether it can be done in NodeXL or not. But, a google search has returned me this link.

It seems that our first issue is to model the graph before visualizing it. I would recommend Neo4j and its Cypher query language.

For the data modeling, states can be the nodes with a population property (or even population for each year), relationship could be the directed migration with the number of refugees and a year property.

Now with such a graph at hand you can easily retrieve the total number of refugees per year by using the year property from the nodes or the edges.

22
Visualizing a graph with a million vertices
1
Graph layout for a network of molecules
7
Visualize graph network with more than 30k edges
1
Data Interpretation with a double line graph
4
Monthly trend with fb prophet-Interpreting the graph
0
What's the best way to plot a bar graph with large numeric difference in values?
4
How to display graph with MathJax in jupyter notebook?
2
Tensorboard with pytorch dont display a graph