I'm currently building an app that strives to predict how the users uses different apps and give the user a suggestion based on which apps it think the user will currently use (a ranked list based on the user's current conditions). I've been collecting some data over the past week now, and I'm not really sure which approach to take. I've been thinking about using multiple seasonalities (correct me if I'm using the wrong terminology) such as time of day, day of week, week of month, month and quarter. I also want to use location, and other sensor data (such as the user state "walking" or "sitting" later on).

I've summarised the usage over the last week on an hourly level for some apps. The bars represents each time the app was opened during that time, and the green line is a weighted moving average which has a weight of 0.5 on its closest neighbours.

Now I see several challenges in front of me and would greatly appreciate some input from others, or some good resources to find further information.

Here some data for the last week on an hourly basis: 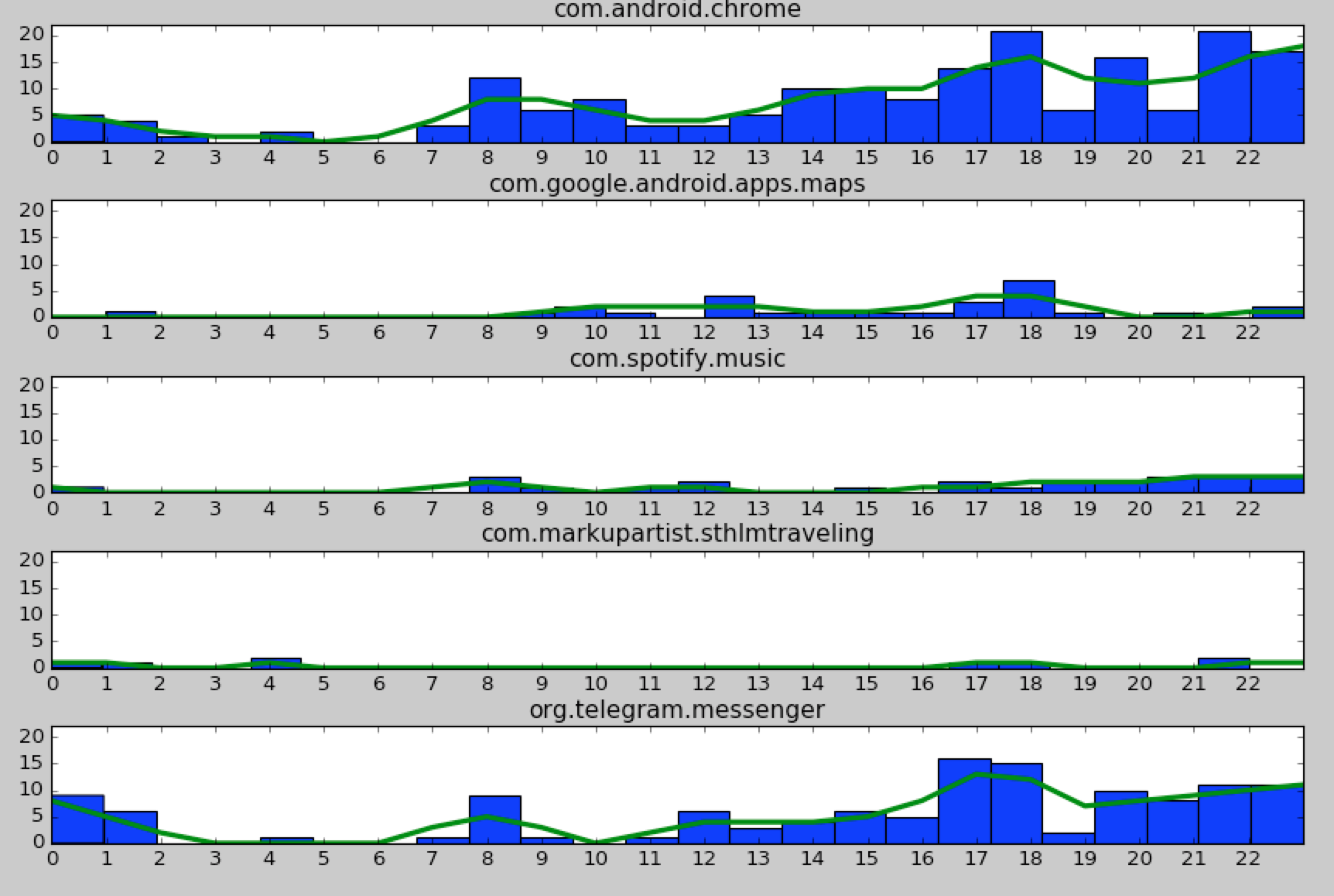 So you have collected data that shows which app is being used at any time, binned into hours in the day. And you have several apps. You mention other dimensions, like user state when using the app (walking, not-walking), (active, not-active - it appears to me that you are not collecting much usage 2-6. is that because the usage is from a self-directed ping from an app while the user is truly away?), location (is this going to be all possible values, or are you going to use something like the fact that this location has been seen often before?). Another interesting relationship could be pairing apps, i.e., mining for a relationship between App A being used after using App B or before App B.

Regardless, then you will definitely have many different dimensions upon which to measure the usage characteristics for any particular usage measurement, and so you are definitely going to have a multiple dimensional problem. You might try to visualize this as an N-space problem, with an axis of measurement for each of your characteristics. Each of your previous measurements represents vectors and you are producing a new vector with your next measurement.

From this, you want to predict future behavior based on measuring the input characteristics from your usage space. You could go for something that classifies as nearest neighbor, and you probably want to do this for your first stab at the problem. You might end up wanting to make the predictive model more sophisticated by adding probabilities to the classifier and acting on that. This means getting estimates of class membership probability rather than just simple classifications. But I would build the whole thing incrementally. Start simple and add complexity as you require it. The increased complexity will also have effects on performance, so why not baseline with something.

For the aging of data, are you wanting to reduce the predictive power of characteristics that are too long in the tooth? If so, be explicit with yourself about what that means, quantitively. Do I trust the usage data from last month less than yesterday's data? Perhaps so, but then why? is my usage different because I am different or because last month was special compared to yesterday, or vice-versa? Again, you might benefit from ignoring this at first, but then trying to search for "seasonal" or periodicity characteristics from the data. Once you determine if/how it changes, you can weight that contribution compared to your immediate usage in different ways. Perhaps you want to amplify the contribution of a similar period (same time of day && same location && same previous app usage). Perhaps you want to provide an exponential dampening on historical data because the usage is always adapting and changing, and recent usage seems to be a much better predictor than 3xcurrent.

For all of this, the proper data science perspective is to let the data lead you.

Not the answer you're looking for? Browse other questions tagged machine-learning predictive-modeling or ask your own question.

1
Machine learning to predict apps (recomendation)
2
Multiclass classification with large number of classes but for each user the set of target classes is known
4
Predicting most likely application to be opened
1
Underlying model for prediction using different prediction variables
1
Prepping Data For Usage Clustering
2
How to train a model to predict a time window than an event will occur on a website
1
Calculate likelihood of a date being worked based on location, hours and rate of pay
1
How to predict when an appointment will be scheduled?