What does my learning curve indicate? 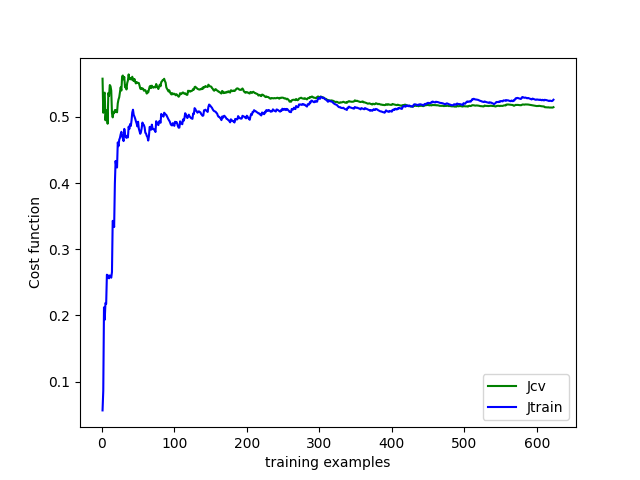 What does it indicate? Since both the curves have a very less difference one is (0.51 and other in 0.52), Is my model biased, or is it correct?

Generally speaking, the "normal" shape of a learning curve (defined as a "plot of error vs training set size is known as a learning curve" (1)) is to observe an initially very low training error indicating that the model almost perfectly learns the small amount of training data while the test error will be high. When the amount of training data increases, the training error is expected to increase, too, as it becomes harder for the model to learn the increasingly complex data. At some point usually the training error stops increasing because data complexity, i.e. the number of distinct patterns in the data, does not increase further - even when adding more data.

In contrast, the test error is expected to be high in the beginning and then decrease when train and test data become more similar (since you're adding more training data). That is, in the beginning the model overfits (which is good news since it means that it's able to learn the data) and later train and test error ideally converge. This occurs when training and test become more similar.

This could look similar to this (The black horizontal line is the Bayes error) (1): 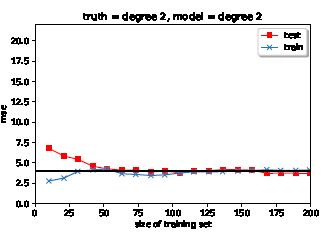 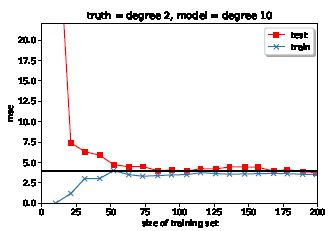 And that is similary to what your graph shows.

In contrast, a model which is not able to capture even simple patterns when the amount of training data is low could produce a learning curve like this (1): 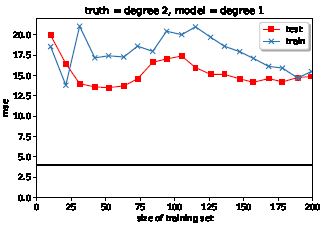 A third scenario would be a very complex model showing a learning curve like this (1): 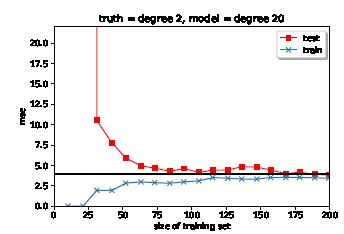 Compared to the first plot, the training error does not increase as fast since the more complex model is able to overfit data even when data complexity increases. But it also shows a very high test error in the beginning and a larger gap between train and test error for larger amounts of data.

This answer might also be interesting for you to read.

2
validation_curve differs from cross_val_score?
3
Why training and validation similar loss curves lead to poor performance
0
Overfit from the loss curve
0
How does the given data gets plotted on a graph
0
What does it mean when the model Learning Curve displays this behavior?
0
In what stage should you plot validation and learning curve
3
At what stage are ROC curves used when building machine learning model?
0
Does the model(best fitting line/curve) changes when the training data is changed in the cross validation?