I have a multivariate time series dataset, from which I am building an ITS (Interrupted Time Series) model by using facebook's Prophet to construct the counterfactual. Let's say I have a y variable that's affected by x1,x2,...xn. How do I quantify the treatment effect, that is the difference between the counterfactual and the post-interruption slope ?

I read a couple of papers and posts stating that we needed to evaluate:

I am confused about this later part, measuring the post-interruption slope: 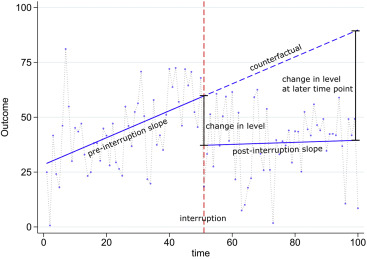 I apologize if those two questions are basic or seem overly simplistic, I am completely new to ITS. Thanks in advance !

Browse other questions tagged time-series causalimpact inference or ask your own question.

11
Feature Extraction Technique - Summarizing a Sequence of Data
1
Treatment and Control selection in A/B Testing
1
What are some good methods to forecast future revenue on categorical and value based data?
2
p-value and effect size
1
Choosing a Change Point Detection Algorithm
0
"Up or down but not sideways" bimodal time series prediction - what is the best way to model it?
2
Google's Bayesian Structural Time-Series