I have this simple neural networks ("Self Organizing Maps"): 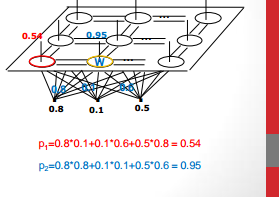 What is the purpose of the lateral connections beetween the perceptrons (neurons) ?

Lateral connections exist so that the update of a neuron forces the neighboring neurons also to be updated but to a lesser degree.

Think of each neuron that has n inputs as a vector, a point in an n-dimensional space. It's coordinates are the values of the weights on its inputs.

Only the winner and its neighbors are allowed to update their weights. All other neurons don't move. The neighbors are those who are closer to the winner than a certain radius. This radius is a hyper-parameter.

Not the answer you're looking for? Browse other questions tagged neural-network or ask your own question.