I apologize for the newbie question, but I'm hoping someone here can point me in the right direction.

I want to predict the time at which an event (x) occurs given several timeseries which I suspect are correlated with the timing of X. My model would take in the full timeseries as input, and output a single value for the time at which event X is predicted to have occurred. Note that I'm not trying to predict the timing of a future event, but the timing of a past event. When using the model, I will have access to the entire timeseries. Here's a quick sketch of what the data looks like: 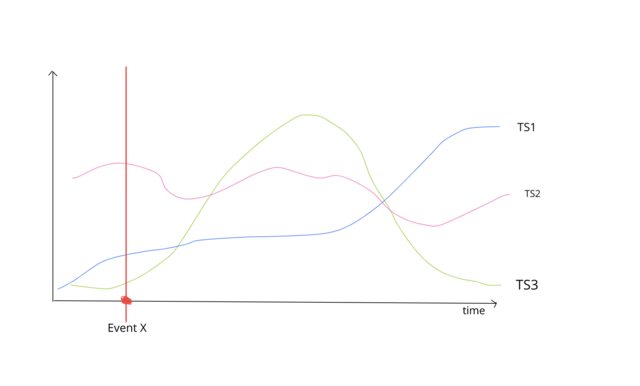 My dataset consists of many examples like the above, that is, several timeseries within a set window along with the time of the event.

Can something like an LSTM model be trained for this task? After doing a bit of digging it looks like LSTM and RNN models are good for predicting the next point in a timeseries, not so much outputting the time of an event like I've described.

I am able to fairly consistently fit curves to some of the timeseries, so I tried training some tree-based ML algorithms on the coefficients of these fitted curves with little success. I'm hoping to try a more sophisticated timeseries-based approach next.

I would appreciate being pointed in the right direction here - ie. what type of model or approach should I be looking into.

This kind of problem can be modelled in two different ways, which I call time-of-event and time-to-event. The first is what you have tried out so far, and illustrated in your picture.

Feed in the entire time-series, and use as target the time of the event. Target can be encoded as the second from start of series, a percentage of the duration of entire series etc.

Divide the time-series into multiple overlapping analysis windows. For each window, compute the distance (in time) to the event of interest, and use this as the target. The target can be expressed in seconds, or number of time-steps. Note that it may be positive (in future, relative to window) or negative (in the past, relative to the window).

At training time, the simplest setup is to treat each such analysis-window,time-target pair is treated as independent instances.

The window length can be quite short relative to entire time series. Ex a 15 minute series with 60 second windows using 5 second forwarding between each window (91.66% overlap). That would give 15min*60s/5s = 180 instances per series.

Or the window length can be quite close to the entire time series. Ex a 15 minute series with 10 minute windows and 1 minute forwarding between each window (90% overlap). Giving 15min/1min = 15 instances per series.

What works best here is highly problem and data dependent.

The use of multiple analysis windows like this is effectively a data augmentation technique (time-shift). Since it is applied also at prediction time, it is also an example of Test-Time Augmentation (TTA).

I would always recommend starting with a non-time series model as a baseline. Summarize the features inside each window (mean,std,(max-min) of each variable), and use Linear Regression, Random Forest to see how it performs. This gives an indication of the complexity of the problem. And is super-fast to do some initial hyper-parameters scans on (for example on window length). And you should plot these features/predictions as part of Exploratory Data Analysis / Error Analysis!

After that I would try a simple LSTM / GRU model, or maybe a 1D CNN.

Not the answer you're looking for? Browse other questions tagged machine-learning time-series or ask your own question.

1
How to build a model which can predict the probability of an event based on a set of timeseries data?
12
When to use Stateful LSTM?
5
Predicting with multiple time series
2
How to train a model to predict a time window than an event will occur on a website
2
Predicting next number in a sequence - data analysis
1
What model do I use to predict a regression problem with timeseries data