I'm trying to choose the best parameters for random forest model.
For that goal I hae run my model in loop with only one parameter and each time I have changed the number for the parameter max depth. I have created two charts: one for the model score and one for the MAE. this is how the charts look like: 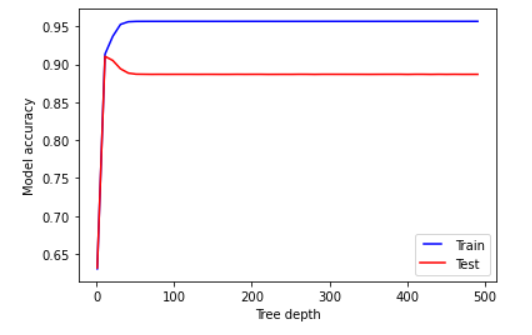 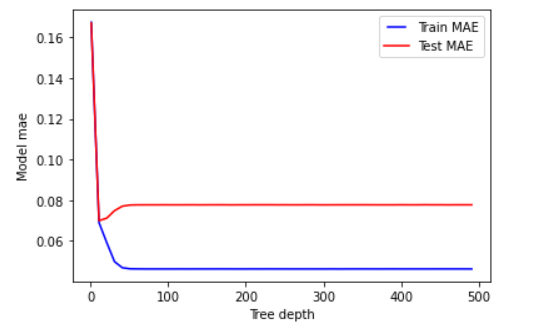 My question is what is the right number to take for that parameter? I fell likeI want to choose really low number when the training set and the test set are close to each other and high (the second point, when the accuracy is above 90) : 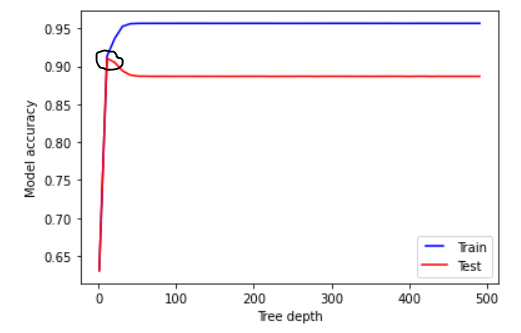 But I see that it gets stabalize much after and i'm afrid that it might lead to overfitting.

Is it true? should I choose bigger number from the stable zone or is ok to take low number as long as the training and test data are having the same accuracy and same error?

In general, the max depth parameter should be kept at a low value in order to avoid overfitting: if the tree is deep it means that the model creates more rules at a more detailed level using fewer instances. Very often some of these rules are due to chance, i.e. they don't correspond to a real pattern in the data.

Overfitting is visible in your graphs from the quite high difference between training and test set performance. One can observe that the performance on the test set increases with the first few values of depth (I'm guessing until around 5 or so), and it starts decreasing after that. So the optimal point (performance and no overfitting) is the point that you mention, it's after this point that the model is overfit.

The stable part of the graph is probably due to another parameter (e.g. min. number of instance per leaf) which stops the model from overfitting even more. If the model was free to overfit as much as it wants, it would probably reach max performance on the training set and very low performance on the test set.

Note: I'm confused why you're using both accuracy and MAE, normally the former is for classification and the latter for regression.

0
Which one I should choose for random forest?
1
Random Forest Model Giving Same Accuracy for different feature sets after tuning
1
What is the selection criteria to choose between XGBoost and Random Forest
1
Find the optimal n_estimator by looping the model accuracy indicator in random forest algorithm - python
1
Random forest and the number of samples
1
Evaluating optimal values for depth of tree
2
The Differences Between Weka Random Forest and Scikit-Learn Random Forest