Why is there a trade-off between bias and variance in supervised learning? Why can't we have best of both worlds?

What statisticians/mathematicians a while ago realized is that any model can be made to perfectly fit the dataset at hand (i.e. have zero bias). Look at this picture, for instance from the Wikipedia page on overfitting: 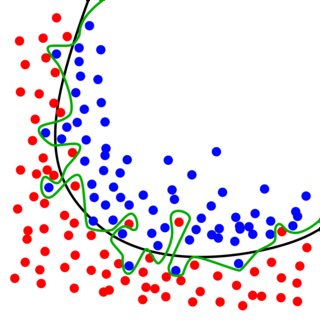 The graph depicts two binary classifiers that are trying to distinguish between the blue class and the red class. The classifiers have been trained on all of the blue and red observations shown in the graph to generate their boundaries. Notice that the green line has zero bias; it perfectly separates the blue and red classes whereas the black line clearly has a few errors on the training set and therefore has higher bias.

The problem? Observations in datasets are realizations of random variables that follow some unknown probability distribution. Thus, observed data will always have some sort of noise, containing observations that don't actually represent the underlying probability distribution. These anomalies can be seen in the graph above in which there are red and blue observations that appear to be "crossing" the implied boundary between the two classes. Clearly, the majority of observations are easily distinguishable in this simple example except for a few cases. These few cases can be viewed as noise, which is inherently random and therefore, cannot be predicted.

The green line, as a result, is essentially fitting random noise which by definition is unpredictable and non-representative. The result is that if we were to train both classifiers again using a new training dataset (from the same process), the "green boundary model" will be expected to generate a very different boundary compared to what is shown above, since it was influenced by data that did not represent the actual underlying data generating process. This is overfitting = high variance. The model associated with the black line, which has refrained from fitting the noise of the data, should be expected to remain relatively stable since it was not influenced by data that was not actually representative of the population.

What does this all mean? The model associated with the black line is closer to reality (the "truth"), and therefore, if we were to pull new observations from "reality" that neither classifier has seen it will, on average, be expected to produce lower overall error despite having higher bias. This is the bias-variance tradeoff, which is really just a way of stating the tradeoff between underfitting and overfitting. I don't have another graph to illustrate this, but imagine if I straight up drew a diagonal line from the bottom left corner to the top right corner, and called this another classifier. Now, my "model" has zero variance; in fact, it is completely independent of the training dataset. But now, I haven't even fit the training dataset. I now have zero variance for tons of bias and large overall error.

The decomposition of MSE into bias, variance, and irreducible error encapsulates the tradeoff. When you hope to fit a model that generalizes well to the population, simply having a model with low bias is not enough and minimizing variance is also important, if not more important. But, if we are to take variance into consideration, we now have to sacrifice some ability to predict the training set well (through regularization) in hopes of obtaining a model that is closer to the truth.

Almost all ML methods use regularization to effectively trade bias (again, worse performance on the training dataset) for hopefully, lower variance. Some examples:

Bias and variance are just descriptions for the two ways that a model can give subpar results. Either the model hasn't learned enough yet and its understanding of the problem is very general (bias), or it has learned the data given to it too well and cannot relate that knowledge to new data (variance). By carefully monitoring how our model is doing in relation to training, test, and validation sets, we are able to minimize bias and variance.

Not the answer you're looking for? Browse other questions tagged machine-learning supervised-learning variance bias or ask your own question.

5
The Bias-Variance Trade-Off
2
Linear machine learning algorithms "often" have high bias/low variance?
27
Why underfitting is called high bias and overfitting is called high variance?
1
How to calculate irreducible error using Bias and Variance for a given machine learning Model?
6
Disparity between training and testing errors with deep learning: the bias-variance tradeoff and model selection
6
What are bias and variance in machine learning?
1
Model Selection using Bias Variance Trade Off
2
Trade-off between variable stability and discriminatory model quality
3
Difference between ethics and bias in Machine Learning